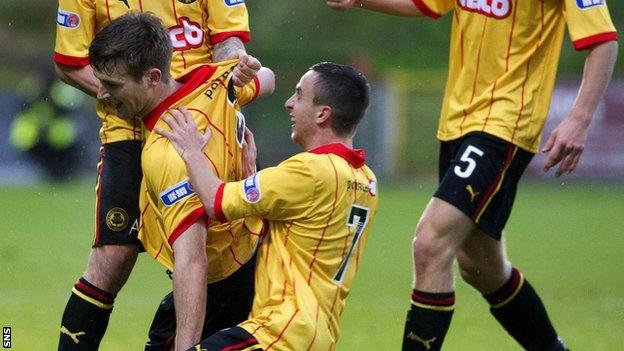 Partick went clear at the top of the First Division with a resounding victory over Dunfermline.

The two sides went into the game separated by just one goal, but the hosts handed out a thrashing to maintain their 100 per cent home record.

Partick took an early lead through Steven Lawless, who diverted Kris Doolan's volleyed effort into the net from close range.

Dunfermline hit back in the 24th minute as Ryan Wallace's free-kick was turned into his own net by Aaron Muirhead.

Stephen O'Donnell dinked the ball over Paul Gallacher to make it 3-1 before half-time.

Thistle got their fourth in spectacular style, Forbes firing into the top corner from 30 yards out.

It became five with 15 minutes left when Lawless got his second, a well-placed effort into the bottom corner from 12 yards out.