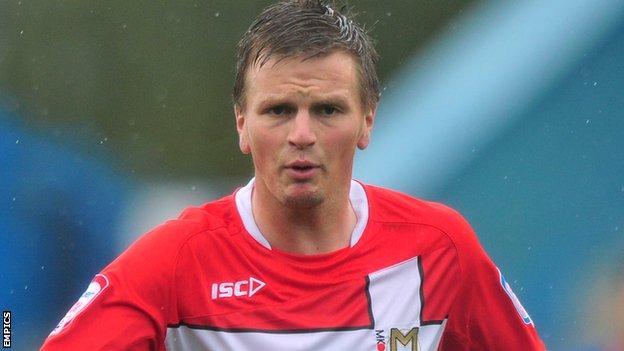 It was no more than they deserved after dominating possession for much of the game against the League One leaders.

Ryan Lowe shot wide after an early slip by Ash Taylor and Dean Lewington later had a header blocked on the line.

But Owain Fon Williams failed to hold Dean Bowditch's cross and Gleeson stabbed home his second of the season.

Rovers posed only a fleeting threat in attack in front of a 10,587 crowd, with James Wallace forcing Dons keeper Dave Martin into his only meaningful save on the hour.

Having seen his defence discomfited by the slick interplay of the visitors in the opening period, manager Ronnie Moore took off striker Jake Jervis at half-time to reinforce his midfield with Danny Harrison.

It meant the Dons had less space and time on the ball but they still had the best opportunities, with Lewington meeting Bowditch's corner, only to see Wallace perfectly placed by the post to deny him a goal.

A stalemate looked on the cards after that but Gleeson had other ideas as he struck with three minutes to go to inflict only Tranmere's second home defeat of the season.