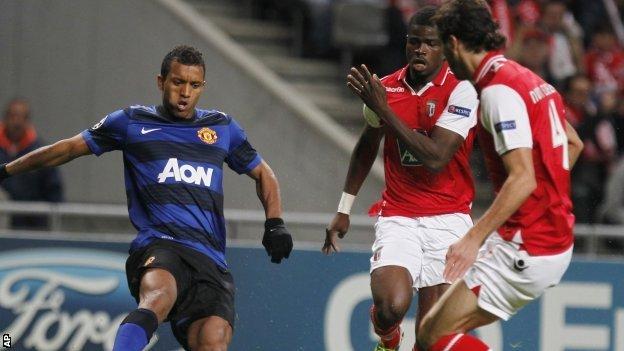 Manchester United winger Nani will miss Saturday's Premier League game against Aston Villa after being ruled out for 10 days with a hamstring injury.

The Portugal international suffered the problem during Wednesday's 3-1 victory over Braga in the Champions League.

United manager Sir Alex Ferguson confirmed: "Nani is out with a tight hamstring. It will be about 10 days."

Ferguson is hopeful that Jonny Evans will recover from a groin injury in time to make the trip to Villa Park.

Evans and Nani were both substituted during the second half of the win in Portugal but Ferguson, while conceding "Jonny is a doubt", said his injury was "not a serious one".

"We will monitor him and hopefully he's fit, as Chris Smalling has just come back so it's asking a lot for him to play again," the Scot added.

"A week's rest would be better [for Jonny]. If Jonny doesn't make it then Chris will have to play."

Following the Villa game, United's next fixture is a trip to Norwich on Saturday, 17 November.