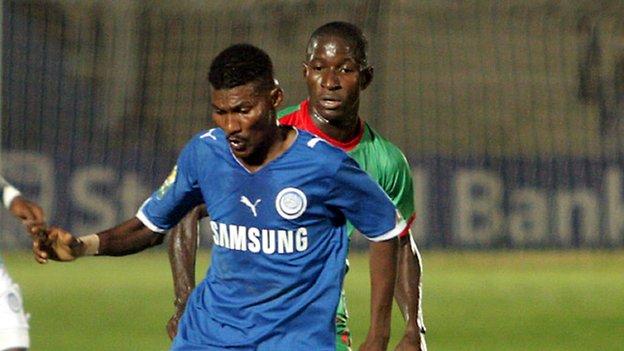 Hopes of a third Confederation Cup final between clubs from the same country evaporated on Saturday when Al Merreikh of Sudan drew 0-0 at home to visiting AC Leopards from Congo.

Merreikh had gone into the second leg of their semi-final in Omdurman with high hopes of overcoming a 2-1 deficit from the first leg.

But the Congolese side held on and will now contest their first ever continental final.

Merreikh were hoping to make it an All-Sudanese finale with their great rivals Al Hilal who are 2-0 up against Djoliba of Mali going into the second leg of their semi-final on Sunday.

Four years ago two sides from Tunisian contested the final and four years before that is was two Ghanaian clubs.

Hilal built their two-goal advantage over first-time semi-finalists Djoliba through goals either side of half-time from Senegalese Ibrahima Sane and Sudan star Mudathir Eltaib.

If Hilal complete the job against Djoliba, they will end a hoodoo that has seen them lose three Champions League semi-finals and one Confederation Cup semi-final in the last five years.

However, Djoliba are unbeaten at home in Bamako in the competition this season, winning three matches and drawing one with a 7-2 goal tally.

They also defeated Hilal 2-0 in a Confederation Cup group game in 2010.

Leading scorers Alou Bagayoko and Idrissa Traore could prove the big threats to Hilal as Djoliba try to go all the way and emulate compatriots Stade Malien, surprise winners of the Confederation Cup three seasons ago.