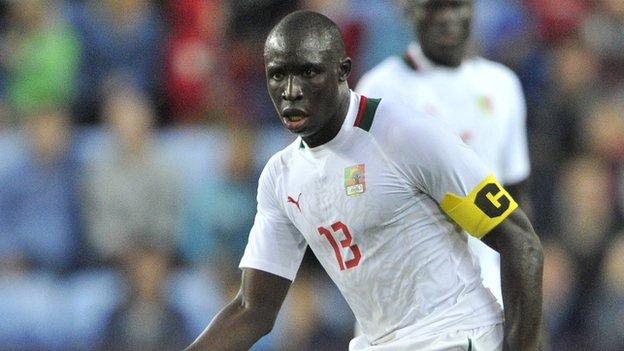 Senegal midfielder Mohamed Diame is confident his country can bounce back from their recent problems to qualify for the 2014 World Cup in Brazil.

Diame was part of the team that was disqualified from the 2013 Africa Cup of Nations after fan trouble in October's qualifier against Ivory Cost.

The 25-year-old told BBC Sport: "Those events are in my head but we have to try to forget and think about football.

"And I am very confident we can qualify for the next World Cup."

Senegal had just conceded for the second time as they hosted the second leg of their final-round qualifier against Ivory Coast, leaving the Teranga Lions trailing 6-2 on aggregate, when fans began to throw missiles, stones, bottles and firecrackers.

It led to the match being abandoned after 74 minutes and, consequently, Senegal were kicked out of the tournament by the Confederation of African Football.

Diame added: "Of course it is not the best thing to have happened. But we have to try to clear out minds of of those bad things.

"We live for football and it is our work, too."

Despite the crowd problems, the failure to qualify for the Nations Cup in South Africa and the sacking of coach Joseph Koto that followed, there is reason for Senegal to be optimistic.

They sit top of Group J in the qualifiers for the World Cup after a win at home to Liberia and a draw away to Uganda that has given them four points.

After the second-round stage, the 10 group winners will play off over two legs to determine who will qualify for the finals in Brazil.

Diame is positive about his team's chances and is looking forward to their next match against Angola in March.

"We can take confidence when we look at the group and see where we are," he said.

"It is important we finish first in this group and remain in the running to go to the next World Cup."

Meanwhile, Diame says he is very happy at his English Premier League club West Ham, who he joined in June.

"When I came here the people treated me very well. It has helped me to play good football," he revealed.

"I have a very good relationship with my team-mates, and we have some very good players."

The Londoners are ninth in the league table after 10 games and Diame believes everyone connected with the club is satisfied with they way they have started the season and coped with a return to the top-flight after winning promotion.

"The team is doing a good job at the moment. The gaffer, the staff and the fans are happy," he said.

"We are looking forward to keeping it going."