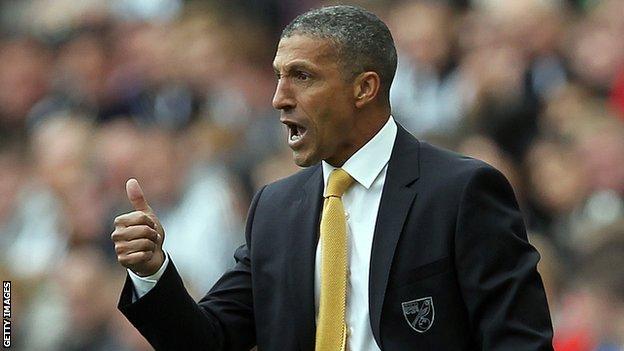 Norwich boss Chris Hughton believes his side's failure to win a single penalty in the league this season is down to his players, not poor officiating.

The Canaries have only been awarded two Premier League spot-kicks in the last 13 months, the most recent resulting in a winning goal against Wolves in March.

"Certainly it's not down to poor refereeing," said Hughton.

"It's about us showing a little bit more in the area that counts. Let's hope we're due one."

By contrast, Norwich - who did win a penalty against Scunthorpe in the League Cup this season - have conceded three spot-kicks this term, although only one was converted.

"If I looked at refereeing decisions around penalties for us, there haven't been too many contentious ones," said Hughton.

"We've got to make sure we put ourselves in the position to get enough clever play in the box that might get us the odd one now or again.

"We have conceded penalties this season. Most of them are because it's a defender making an option to try and stop a goal.

"We've got to put ourselves in that position against defenders more often."

An away league victory has also eluded the Norfolk club, who have taken seven points from their last three games.

And a trip to winless Reading on Saturday could be the perfect opportunity to secure a first triumph on the road.

"Arguably our best away performance was the 1-1 draw at Tottenham and I'm disappointed we didn't get something from that," Hughton told BBC Radio Norfolk.

"If I could guarantee getting enough points at home this season to see us OK then fine - but that can't be the way you work things.

"You've got to approach any away game the same way you do a home game. It's just a fact that it's more difficult away from home. But we certainly apply ourselves in the right way - whether it's home or away."