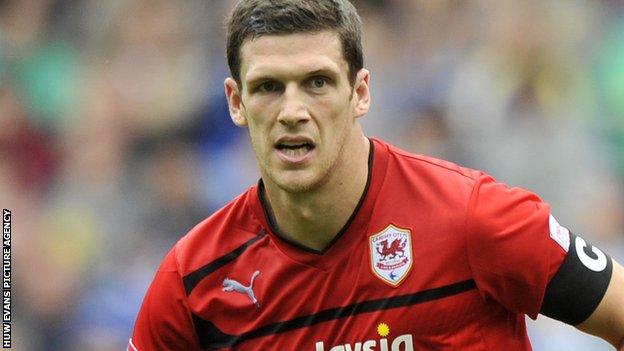 Ex-Bluebirds striker Nathan Blake has questioned the captaincy credentials of Hudson following defeat at The Valley.

Blake does not think Hudson is the best man for the job but Mackay has defended his skipper.

"The 13-14 months of football I have watched since I've been here he has been absolutely exceptional.

"[We've] got someone there who is an absolute diamond for this football club."

Cardiff lost their fifth away game of the season at Charlton on Tuesday after squandering a 2-0 lead at The Valley.

Mackay's side were cruising at 2-0 with 24 minutes played before Johnnie Jackson's double before the interval levelled the score.

The home side took control in the second half with three further goals and despite late goals from Craig Noone and Aron Gunnarsson.

Mackay described the defeat as Cardiff's worst defensive display of the season which saw slip to third in the Championship.

Errors by keeper David Marshall led to two Charlton goals but Mackay has come out in support of his fellow Scotsman.

"My goalkeeper has been nothing short of exceptional in the time I've been here," Mackay added.

"I've got a goalkeeper who I think is as good as anything and wouldn't swap him for anything in the Championship. That deserves loyalty."

Cardiff's away form is in contrast to results at the Cardiff City Stadium, where they have a 100% record so far this season.

Mackay's side will be looking to secure their eighth consecutive home win on Saturday when they host fourth-placed Hull City.