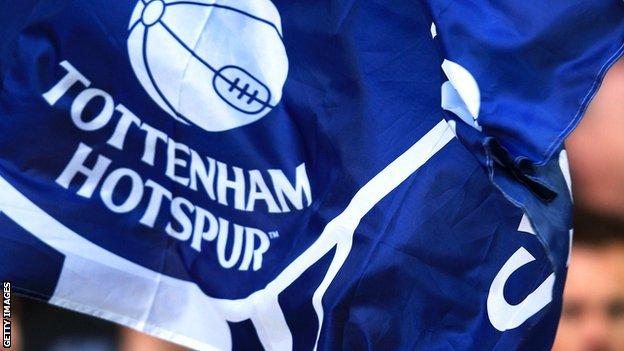 A Jewish spokesman for the Tottenham Supporters' Trust has defended fans' rights to use chants that have been described as anti-semitic at matches.

The Society of Black Lawyers (SBL) has called for Spurs fans who chant "Yid Army" to be prosecuted.

But Daniel Wynne told BBC Sport: "I accept what the word means, but I don't find the chant offensive when used by Tottenham fans.

"In that context it is used positively as a call to arms, a badge of honour."

Tottenham's chanting of the Y-word, a reference to the club's Jewish supporters, is in the spotlight after SBL chairman Peter Herbert said unless the club or the Football Association took a stand on the matter he would report it to the Metropolitan Police.

"Our fans adopted the chant as a defence mechanism in order to own the term and thereby deflect anti-semitic abuse. Our position on this topic is very clear. The club does not tolerate any form of racist or abusive chanting.

"Our guiding principle in respect of the Y-word is based on the point of law itself - the distinguishing factor is the intent with which it is used, ie if it is used with the deliberate intention to cause offence. This has been the basis of prosecutions of fans of other teams to date.

"They do not use the term to others to cause any offence, they use it a chant amongst themselves.

"We believe this is the area that requires a determined and concerted effort from all parties and where we seek greater support to eradicate."

Herbert received support from Jewish comedian David Baddiel, who argued in the Daily Mail that Spurs fans had no right to redefine the meaning of a historically offensive term for Jews.

In a statement, Spurs insisted the chanting, which dates back to the 1970s, was a "defence-mechanism" against taunts from rival fans.

At Thursday's Europa League match against Maribor, supporters responded to Herbert's call by chanting "we sing what we want" and "Y-word Army" throughout the match.

Wynne, a former chairman of the Supporters' Trust Board, says despite his heritage he willingly joins in the Y-word singing at matches.

"My father escaped Nazi Europe and settled in England," he said. "I've been to Auschwitz, I've been to the Anne Frank House, I've been to Yad Vashem [the World Centre for Holocaust Research] in Jerusalem. My wife's family also had to be uprooted.

"If someone wants to come and throw that word at me in the street, I would be upset by it and if I thought Tottenham fans were using it offensively then I would be campaigning shoulder to shoulder with David Baddiel and others to stop them using it. But the fact of the matter is we are not.

"By taking ownership of that word, by using it ourselves, it shows we are not bothered by what people are singing about us."

"I understand that it can be used as a nickname in some quarters, but if it's important to stop the use of the word then you can't use it either way.

"You can't use it as a nickname or a chant for Tottenham because abusive chants will come back. The more they use it, the more opposition fans will use it. If it is banned altogether then hopefully we won't get the abuse at all. It needs to be tackled in the same way as racist chanting.

"The sanctions need to be high and then it will be stamped out of the game for good. We need zero tolerance."

Oldham's Dean Furman, who is Jewish

Tottenham say they accept the use of the Y-word as long as it is not intended to carry offence, although no merchandise bearing the term is allowed to be sold in the club shop.

In a statement released to the BBC on Friday, the FA said it would continue to work with the club.

"The FA acts on all reported incidents of discrimination and we continue to work with both Tottenham Hotspur and the Crown Prosecution Service on the matter of anti-Semitic chanting," an FA spokesman said.

"The FA takes all matters of discrimination with the utmost seriousness and encourages the reporting of any such incidents through the appropriate channels."

Wynne argues that the focus of any crackdown should be directed towards other clubs' fans, who use the Y-word as a term of abuse towards Spurs.

"I feel the point is being missed be a number of people," he said. "They need to focus their attentions on Chelsea fans, West Ham fans and a number of other clubs who use it in a derogatory way. That is what has to stop."

Wynne's views were largely echoed by Bernie Kingsley, a member of the Tottenham Supporters' Trust board.

Kingsley, however, said he would not chant the word himself because he is aware of the offence it can cause.

"I don't use the word at all because I have very close friends who are Jewish and they don't like it but I think a lot of the arguments being put forward by Spurs fans are perfectly legitimate. " Kingsley told BBC Sport.

Kingsley believes the SBL are wasting their time in pushing for the police to prosecute.