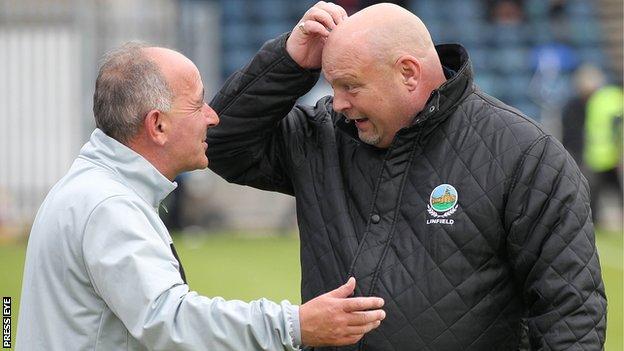 Premiership champions Linfield will be without midfielder Ryan Henderson and full-back Niall Quinn for Saturday's big clash with leaders Cliftonville.

Defender Steven Douglas remains absent as he is awaiting a knee operation.

Linfield's David Jeffrey knows his team face a big test, saying: "Cliftonville are nine points ahead of us and the pressure is on my players."

After their patchy early-season form, Linfield have won their last four in all competitions and moved up to sixth place last weekend by beating Donegal Celtic away.

Cliftonville drew 1-1 at Glentoran in thelr last league match and are three points clear of second-placed Ballinamallard United, the only team to beat them at Solitude this season.

"We just want to keep our scoring record going," said Cliftonville striker Liam Boyce, winner of the October player of the month award.

"You can never rule Linfield out. Now they have got a bit of confidence, you never know how many games in a row they can win."

Ballinamallard have produced an impressive run of results in their first campaign in the top flight and will hope to complete an early-season league double over Portadown when they travel to Shamrock Park on Saturday.

Saturday's Sportsound programme on Radio Ulster (1400 GMT) will be presented from Solitude by Michael McNamee, with guest Marty Quinn, former manager of Cliftonville. Live commentary on the big match comes from Joel Taggart with analysis by ex-Linfield striker Chris Morgan.

Ballinamallard have lost just one of their last nine Premiership fixtures, a run which includes a 2-0 home success over the Ports.

United midfielder James McKenna misses the match because of a one-match suspension after picking up five yellow cards this season but Jason McCartney is eligible again.

Ballymena are at home to Crusaders with Sky Blues boss Glenn Ferguson aiming to pick his players up after their 6-0 hammering at home to Linfield in Monday night's League Cup quarter-final.

United are unbeaten at home in the league for nine months but confidence will have taken a knock.

Crusaders, unbeaten in five in the league, are up to third although they have been inconsistent on their travels this term.

At the bottom of the table, the big encounter sees Glenavon, with just one point from their last seven matches, take on one-from-bottom Donegal Celtic, the only Premiership team without an away win all season.

Glenavon will be boosted by their League Cup win over Glentoran while former assistant manager at Mourneview Park, Pat McAllister, has recently started a second spell in charge of DC.

"Packie will have them fired up and it is also the first time back at Mourneview for Mark Miskimmin and Peter McCann so they will be out to show what they can do," Glenavon player-manager told his club's website.

"If we keep the same attitude, will to win, hunger and desire that we showed on Monday night, the result will take care of itself, there is no doubt about that."