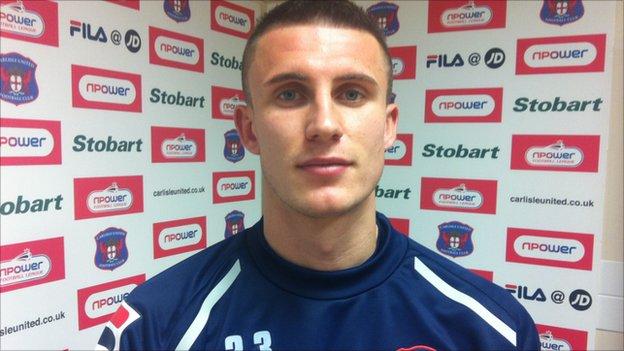 Chester, Dudgeon and Evans are now playing Championship football with Hull City after previous loan spells in League One at Brunton Park.

"A lot of clubs watch the games. League One football is tough and it's a great place for me to be at."

Imports from down the M6

Manchester City and Manchester United have enjoyed a positive relationship with Carlisle United, reflected in the alumni of loanees to have made their way up to Cumbria from both clubs.

The 19-year-old joined the Old Trafford club from Charlton in July 2009, and has since played a handful of games during loan spells with Morecambe and Oxford United.

"It's one thing playing reserve-team football, but obviously when you're in a first-team environment it's different," he said.

"You're treated professionally, and it's dog-eat-dog. If you're all together as a team, you need the points.

"People have got mortgages to pay and every point is vital, so it's a great experience to be involved."

Abbott added cover to the Carlisle squad after a hand injury to defender Danny Livesey in the 4-2 FA Cup win against Ebbsfleet last weekend.

"I play at centre-half and left-back. It's good to be versatile in both positions," McGinty continued.

"As a centre-half I win my headers, tidy on the floor and keep the ball, drive out with it, while at left-back I get up and down the wing, try to get on the ball."