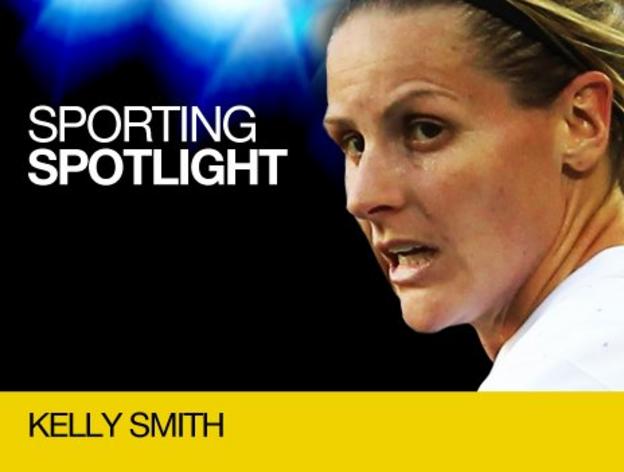 England's record goalscorer Kelly Smith has had an eventful season on and off the pitch, playing in the Olympics, helping England reach next summer's European Championship and sealing a Women's Super League title for Arsenal.

She has also released a frank and honest autobiography documenting her addiction to alcohol when playing in the United States. So BBC Sport put her under the spotlight.

How do you reflect on your season?

My season has been so stop-start with injuries so it's not been my best year in terms of playing time and I've been frustrated by that. But at Arsenal we were delighted to beat FC Turbine Potsdam to reach the Champions League quarter-finals. It would be great if we could get an Arsenal team playing the final in London.

We lost 6-2 to Germany in the 2009 final and it hurt getting beaten so heavily. In the last half-hour we kind of fell apart but we remember that and how it felt. The goal this time is to go one step further and win it. None of the players has won a gold medal or lifted a trophy at senior level for England and that's certainly the aim of the team next summer.

Could this be your last tournament for England?

I still feel fit and feel like I've got a lot to give to the game. At the Olympics I wasn't at my best because of a leg break but my next major tournament is probably going to be my last one so I'm hoping that my body will be fit enough to allow me to get there. The plan is to go out with a bang and win it.

Will you continue playing domestically?

I've still got a good couple of years in me. I still feel like I can play in the Women's Super League even if I wasn't playing internationally. I'll continue playing for Arsenal when I've stopped for England.

How do you rate the standard in the Women's Super League?

The standard of competition has certainly improved since I left for the United States three years ago. Teams seem more organised, there is more quality in each team and the games are a lot closer. When I was at Arsenal before, we were thumping teams and that wasn't much fun.

What needs to improve?

Each year the bar needs to be raised even more in terms of funding for the teams and the pitches we play on. I would also like to see clubs training three or four nights a week just to improve the standard. I've come from a professional level, where you are on the ball nearly every day, whereas in England it's only a couple times a week, even at Arsenal.

The 2007 World Cup in China was the highlight of my career. I'd worked so hard for so many years to get there

What will you do after your playing career has ended?

Coaching is certainly something I'd like to do when I stop playing. Coming into the latter part of my playing career, I'm trying to be as observant as I can in coaching sessions and I'm about to do my FA Level 2.

I've enjoyed it when I've coached kids in the past but I do get extremely nervous and have so many negative thoughts that I'm not good enough. But hopefully the more experience I get, the more easily it will come to me.

What has the reaction been to your book?

I've had so much positive feedback, I've actually been quite surprised by it. People are saying how it has given them a better understanding of the women's game and how I've helped a lot of people who have been through the same things as me in terms of wanting to give up but having the strength and courage to carry on.

Were those points the lowest in your career?

When I had surgery on my knee on two separate occasions I felt lost, really. I didn't know what to do with my life. I just felt like everything had been taken away from me. I needed to stop a couple of times when speaking about that for my book as it brought all the memories back.

What about the highlight of your career?

The 2007 World Cup in China. That was the first major tournament that England had qualified for since I'd been on the national team since 1995. I'd worked so hard for so many years to get there. The draw with France to qualify and then to experience that tournament was out of this world. It had been my dream to play at a World Cup, I scored four goals and that was probably my peak time then.

Do you have any regrets?

Breaking my leg this year in February. It was only going to be a six-week injury but I made it worse by kicking a ball on a photo shoot and it turned into three months. That was a regret because I didn't feel like I was at full fitness at the Olympics which is one of the biggest shows, sporting-wise, in the world.

Messi is so talented with the ball at his feet. He's a team player and that's what I like about him. It's not about the glory, it's about the team and the people around him. He skips past players like they are not even there and that's fun to watch.

It's a good way to get a fan base and connect with supporters. You don't see it a lot at the highest level of the men's game but you can interact with fans on a different level compared to any other medium.