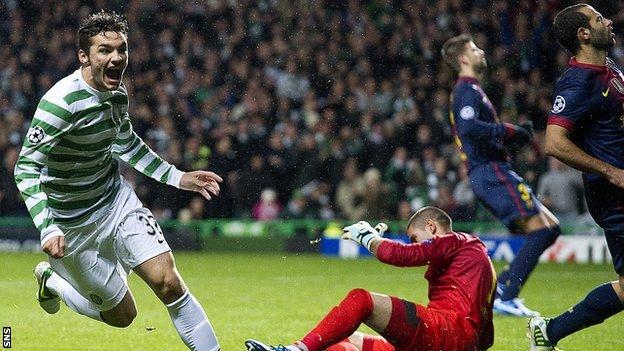 Celtic manager Neil Lennon has revealed the club have entered negotiations over a new contract for Tony Watt.

"We're hopefully going to get over the line with a new contract for him pretty soon," said Lennon.

We are going in the right direction

"Tony got the goal which will live long in the memory. I hope he's not remembered just for that. I want him to have a really succesful career."

Meanwhile, the Celtic manager insists few managerial posts would be able to offer experiences like the Champions League victory against Barca.

"Would I get a better night than that anywhere else in football? I would doubt it very much," he said ahead of

"It is what makes the club unique, there is something special about the club on a European night and it manifested itself in all its glory on Wednesday.

"I got an inkling that there could be something special in the air for Wednesday night and it was a very special couple of days.

"But it will not be up to me, it will be up to the board whether they want me here or not.

"They know what this club means to me, it is a good fit for me.

"I have a good relationship with [chief executive] Peter [Lawwell] and [majority shareholder] Dermot [Desmond] but that doesn't last forever.

"But we are going in the right direction."

Many congratulated Lennon following Wednesday's result, including one notable celebrity.

"I had a lot of texts from people in the game which was fantastic but I got a call yesterday from left field from Sir Elton John believe it or not, congratulating me," added the Celtic boss.

"I thought my missus was winding me up but it just shows you the interest it has generated among a lot of people.

"He was very knowledgeable about the game and knew a lot about myself and it was great that he took time out to call me, as he is going to Australia on tour."