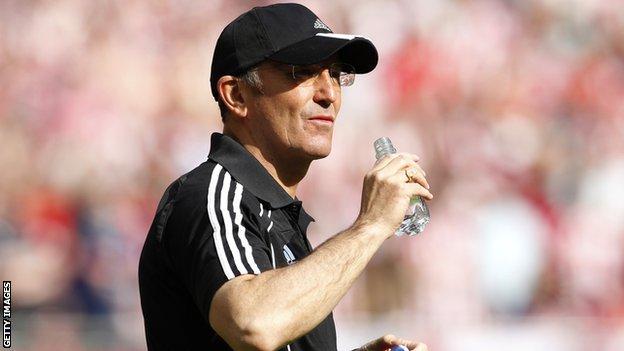 Stoke manager Tony Pulis hopes Mark Hughes will accept his invitation for a post-match drink at the Britannia following their recent fall-out.

The pair have not got on since Hughes, then boss of Fulham, refused to shake Pulis's hand following Stoke's Carling Cup victory in September 2010.

Hughes takes his struggling QPR side to the Britannia on Saturday, and Pulis is determined the two Welshmen make up.

"It was two Celts having a spat, nothing wrong with that," he said.

"There will be absolutely no problems on Saturday. I think Mark will be more concerned about getting QPR sorted out, and me the same with my team, than anything between us.

"But you have your moments in sport. We're both competitive people.

"He did invite me for a drink down at QPR last season, and he'll be invited up for a drink following Saturday's game. That's the way it is."

Asked whether he took up Hughes's offer after Stoke lost 1-0 at Loftus Road on 6 May, Pulis added: "No I didn't because they got the points to help them stay up, and it was chaos there afterwards."