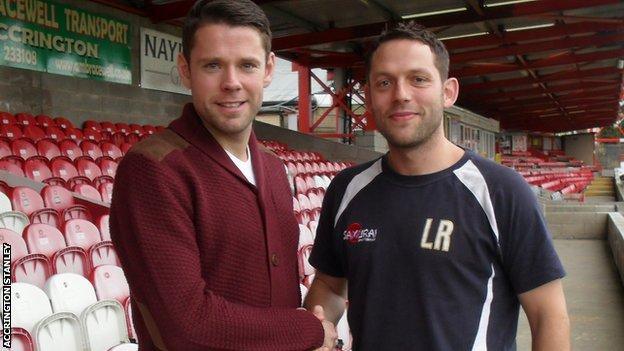 The 34-year-old, who in the summer, and new Stanley boss Leam Richardson were at Blackburn Rovers together as youngsters.

"Leam has come in as the manager and asked me to come along and play some games and do a little bit in a coaching role," he told BBC Radio Lancashire.

Beattie, who won five England caps, has signed a contract until January.

He continued: "I'm delighted to be here and can't wait to get started.

"The coaching role has put another angle on things for me, but I've signed a playing contract so I want to get involved in that as soon as I can.

"If there's anything I can lend to Leam and the coaching staff here, that'll be great."

Beattie began his career at Blackburn and moved on to Southampton in 1998 as a makeweight of the deal that took Kevin Davies to Ewood Park.

He scored 76 goals in 233 appearances in six and a half years with the Saints and played in the 2003 FA Cup final defeat by Arsenal.

Spells with Everton, the Blades (twice), Stoke City, Rangers and Blackpool followed, but he has been without a club since leaving Bramall Lane at the end of last season.

Richardson added: "My relationship with James goes back a long way, right back to our Blackburn days.

"Throughout his career, he's been fantastic. He's a great pro and for him to come to Accrington Stanley is a massive boost for the club.

"First and foremost, I want James to be out on the pitch for us. I want him to help the lads out because we've got a young squad.

"Off the pitch, I think the lads can learn a lot off James as well.

"From the summer onwards, clubs have wanted his signature and he's not felt that it's been right. The role here feels correct for James to push forward in his own career.

"It's a great lift for myself, the players and the club, and hopefully we can extend it further."