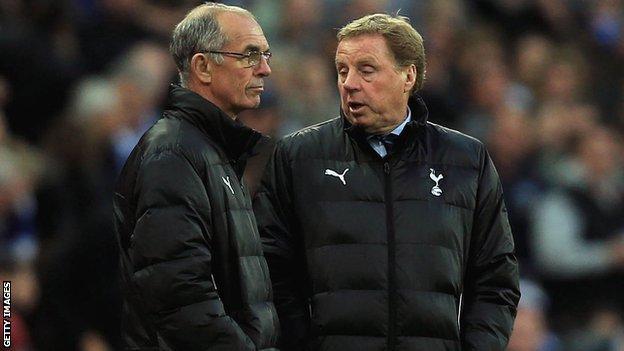 Harry Redknapp has told BBC Scotland he is not interested in the vacant Scotland manager's job.

The 65-year-old is currently a free agent after leaving Tottenham Hotspur in the summer.

You could put your life on Joe Jordan

And, asked if he would like into move international management with Scotland, the Englishman said: "No, not really."

"There's enough good Scots lads about to take the job," explained Redknapp, who also considers Gordon Strachan a good candidate for the role.

"I wouldn't really be in the running for that job.

"It's a big job, a great job for somebody and Joe knows it. He knows the game. He's a very solid guy, he's a fantastic guy.

"He's nothing like the Joe Jordan that you knew as a player - a real fearsome character on the pitch. Joe's a quiet family man, really dedicated. You could put your life on Joe.

"When I worked with him at Tottenham and Portsmouth, he was always the first one at the training ground every morning and absolutely dedicated to his job."

Meanwhile, Kenny Black revealed he turned down a request by Scottish Football Association chief executive Stewart Regan to continue working with the national team for Wednesday's friendly in Luxembourg.

Motherwell assistant manager Black was part of Levein's backroom staff and believes the new manager will inherit a good squad.

"It was straightforward to me - once Craig leaves the post I go with him," he said.

"They did sound me about my thoughts about going on the trip and I explained to Stewart the Luxembourg one would be very, very difficult for me to go on because I was part of a team along with Craig and [assistant] Peter [Houston] and once the decision was made about Craig it was straightforward for me to walk away.

"There is no question the squad is a lot stronger. You just need to look at the guys in the squad who are plying their trade down in England in the top division.

"There has been a lot of work behind the scenes to promote the younger ones coming through.

"Unfortunately Craig will not be there to see the fruition but over the next few years I'm sure things will take an upwards curve for Scotland."

Scotland Under-21 coach Billy Stark will take charge of the senior squad for next week's match, assisted by Ricky Sbragia.