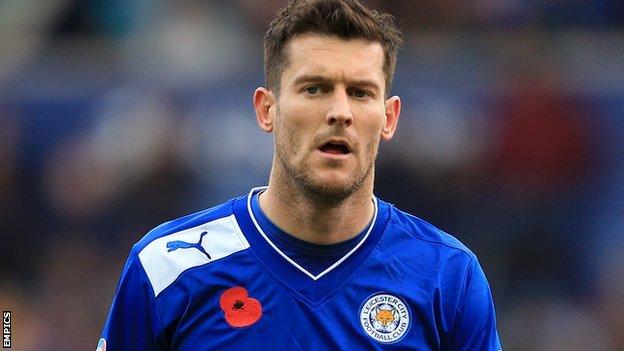 Nugent scored a penalty after keeper Stephen Henderson brought down Lloyd Dyer and chested in a second after Martyn Waghorn's parried effort.

Dyer added the Foxes' third with a powerful strike before setting up Anthony Knockaert to sweep in a fourth.

Waghorn curled in a shot and Marko Futacs completed the rout with a first-time shot before Michael Chopra had an Ipswich goal disallowed for offside.

Leicester's victory ended a run of four league matches without a win, while Ipswich boss Mick McCarthy was given plenty to think about as he tries to steer his side out of the relegation zone.

McCarthy had given Bradley Orr, signed on loan from Blackburn on Wednesday, his debut but the right-back played a part in the visitors conceding their first goal of the game.

Orr and Henderson failed to deal with a Danny Drinkwater through ball, which led to the Ipswich keeper bringing down Dyer.

Nugent confidently converted the penalty and, when Henderson could only parry Waghorn's fierce shot, the scorer pounced for his second.

Leicester were comfortably on top, with strikes from Dyer and Frenchman Knockaert turning their dominance into a four-goal lead.

Luke Chambers headed a rare Ipswich chance over before Waghorn and Futacs, with his first league goal for the Foxes, sent the visitors' goal difference to -25 from 17 games, a deficit already 16 goals greater than the next worst in the division.

"You hope if you turn in the performances you put in a result like that. Over the course of the season I think some of the football and attacking play has been outstanding.

"I thought we were very, very professional today from start to finish. It was a very accomplished performance.

"I have worked with Lloyd Dyer since he was a young boy at West Brom and I think that in the last few weeks he has been playing the best football of his career."

"We are brittle and timid at the minute and if you want to describe it as awful and abject I am quite happy with that to be fair.

"We talk about being hard to beat and not doing anything stupid and then we give away a penalty. The manner in which we conceded the goals today was dreadful. It was embarrassing to be honest.

"This was awful. There were no positives and we have to try and make sure it doesn't happen again."