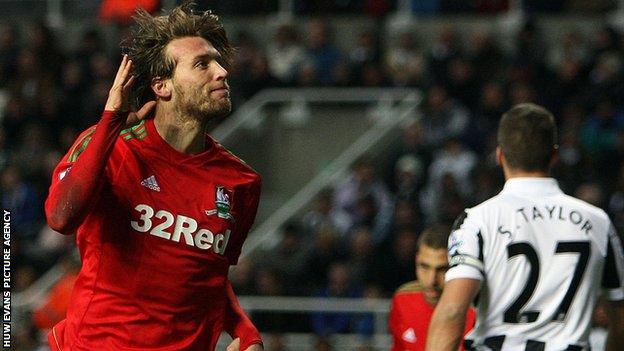 Michu and Jonathan de Guzman were on target as Swansea secured their second away victory of the season and their first win over Newcastle in 32 years.

Newcastle were dealt a blow before kick-off with Senegal and replacement Sammy Ameobi was one of three changes to the home side's line-up.

For Swansea, on-loan striker Itay Shechter was given a first Premier League start in place of the injured Ki Sung-Yueng while Nathan Dyer was preferred to former Newcastle player Wayne Routledge.

Dyer, who scored last week at Southampton, found himself through on goal early on after being played in by Shechter but under pressure from Steven Taylor the winger shot harmlessly wide.

Both sides showed plenty of promise during a lively opening at St James' Park with Hernandez firing straight at home keeper Tim Krul before Newcastle's Hatem Ben Arfa slammed a shot into the side-netting after linking up well with Danny Simpson.

Krul made a low save to parry Michu's effort from outside the area, while at the other end captain Taylor headed over the crossbar from Vurnon Anita's corner.

The home side were beginning to force their way into the game and from Ben Arfa's excellent delivery from the right, Demba Ba got in between Ashley Williams and Garry Monk but glanced a header wide from 10 yards.

Ben Arfa was seeing plenty of the ball and the France international tricked his way past two players on the edge of the area before curling in a dipping effort that forced Gerhard Tremmel into a fine one-handed save.

But Swansea were looking impressive on the counter-attack and Shechter capitalised on hesitation in the Newcastle defence to force a save from Krul before Michu dragged his shot wide as the half ended goalless.

The hosts began the second half brightly with the Ameobi brothers - Sammy and half-time substitute Shola - combining to tee up Anita, who fired over from 25 yards, while Ba also had two chances in quick succession.

Having survived those scares, Swansea responded on the counter-attack and Shechter should have done better when he received the ball from Hernandez and fired wide from 15 yards. Krul also had to turn a Hernandez shot around the post.

But the visitors did not have to wait too long for the game's opening goal and it was the Newcastle keeper who was to blame.

Krul's poor clearance from Mike Williamson's back pass fell to Hernandez, whose cross from the left found the advancing Michu to head home his eighth goal of the season.

Rather than sit back Swansea continued to push forward and Michu should have added a second but the Spaniard scuffed his shot from close range following Hernandez's cross.

Swansea wrapped up the victory three minutes from time when Krul could only parry substitute Graham's shot and De Guzman netted the rebound.

Ba's stoppage-time header, after substitute Sylvain Marveaux had struck the bar, was little consolation for Alan Pardew's side, who have now won only one of their last 10 league games.