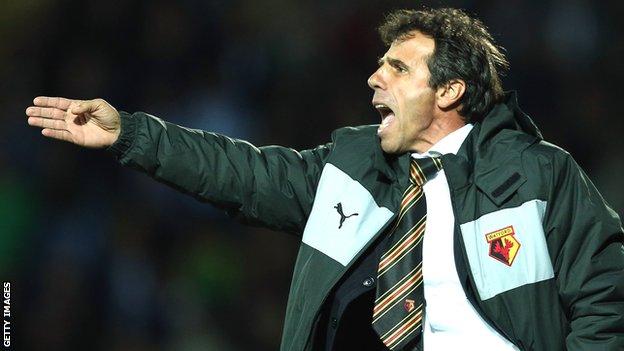 Troy Deeney's fourth goal of the season saw Watford past 10-man Wolves and continued their improvement under manager Gianfranco Zola.

Wolves defender Christophe Berra was sent off for a challenge on Deeney before Nathaniel Chalobah turned home from 12 yards to open the scoring.

The visitors levelled against the run of play when Bakary Sako fired past Manuel Almunia from around 35 yards.

But Watford won it when Deeney headed in a Mark Yeates cross from six yards.

The Hornets, who won 6-1 at Leeds last time out, are still unbeaten in November, while Wolves have not won in seven games.

Zola said in the build-up that his side were ahead of schedule in terms of their development, and they proved it against a team relegated from the Premier League last season.

There was little to choose between the teams early on, but the game changed when Berra received a straight red card after 25 minutes.

And the Hornets soon led as Chalobah applied the finishing touch after impressive work from Fernando Forestieri.

Daniel Pudil saw his 20-yard shot blocked by Roger Johnson, while a drive from Forestieri cleared the crossbar and Hogg shot wide.

Wolves reached half-time without any further damage though, and they managed to level after the break through Sako's special strike.

Forestieri and Pudil went close to restoring the hosts' lead, both men being denied by Carl Ikeme in the Wolves goal.

Sako tried his luck again, this time from 30 yards, but his left-foot effort was blocked by Yeates as Stale Solbakken's side showed fight.

But they were caught out when Deeney converted a Yeates centre to make it 2-1 and Watford held on.

"Although they were playing with 10 men, we created a lot of chances and we had good opportunities.

"It is fair to say they put a lot of pressure on, especially in the last 10 minutes, but we certainly played a good game and there were spells in the game when we played very good football. Nobody can say it wasn't a deserved win.

"The consistency of the results is certainly improving and that is such an important thing in terms of confidence. We just need to carry on and we want to extend this little run longer."

"I think I agree with everyone who says it's a very harsh one.

"If you see the kind of tackles and things going on in the Championship, I think it is a very, very small body contact and I think it's a very harsh decision.

"There's no appeals from anyone, from a Watford player or even the dugout, and I think the referee just created a problem for himself after that but that's his decision.