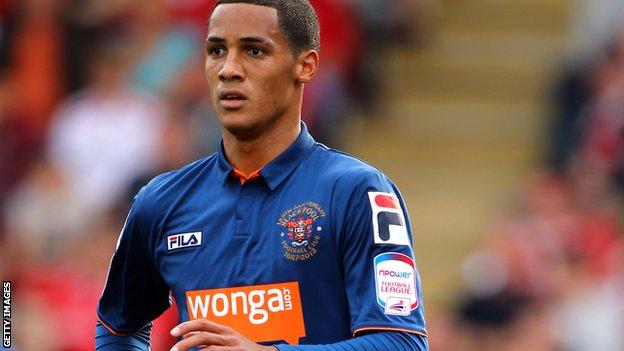 An injury-time Thomas Ince penalty secured a point for Blackpool and denied hosts Bristol City a first win since September.

A Steven Davies penalty with nine minutes left had given the home side hope of a rare win after a run of seven successive defeats.

But Ince then converted in stoppage time after Matthew Bates handled.

Derek McInnes's side came close to scoring their first goal in nearly six hours of football when Neil Kilkenny hit the bar from long range in the ninth minute.

Midfielder Ince, son of former England international Paul, forced City keeper Tom Heaton into action on several occasions, with the third - and best - save coming just before the hosts took the lead.

The away side mostly had the better chances but were grateful for a brave block from Craig Cathcart that denied Marvin Elliott after an hour.

City were close to their first win since they beat fellow strugglers Peterborough on 18 September when Bates, whose loan from Middlesbrough was only ratified shortly before kick-off, handled in the area to present Ince with the chance to equalise from the spot.

Blackpool have drawn both their matches since Michael Appleton replaced Ian Holloway as manager, while City remain in the bottom three.

"I just don't see how the referee could have been sure Matthew Bates handled. I have watched the incident five or six times and I still can't tell whether it was a penalty.

"My understanding is that officials have to be sure so I think we have been hard done by. I also felt there was a foul on one of our players in the build-up.

"It hasn't been an easy time for anyone associated with the club, but there were a lot of positives to take out of today's game and it is something to build on."

"To say it was soft is being kind. The ref took four or five seconds to make up his mind and seemed set to award a goal-kick before the home fans reacted.

"It was frustrating to fall behind because we had squandered several great opportunities to score. But the spirit the lads showed to fight back was great.

"I'm just grateful a linesman was on the ball for our penalty. We need to be more clinical in our finishing, but I am happy with the way the players are responding to what I want them to do."