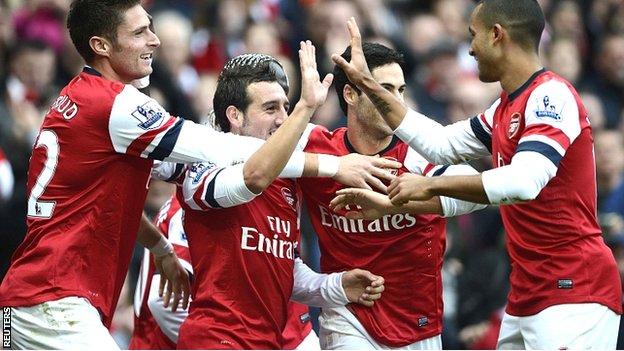 Arsenal benefited from Emmanuel Adebayor's sending off to secure a comeback victory over Tottenham and move above them in the Premier League.

Adebayor tapped Spurs in front against his old club but was dismissed for a high and late tackle on Santi Cazorla.

Per Mertesacker headed the hosts level then Lukas Podolski and Olivier Giroud struck before half-time.

Cazorla slotted in and although Gareth Bale drilled home to pull one back, Theo Walcott sealed the points late on.

Arsenal's first league win since 27 October, courtesy of an identical scoreline to last season's corresponding fixture, takes them up to sixth in the table.

While they have still only suffered one home defeat by Spurs in 19 years, this was not as convincing a victory as the scoreline suggests.

Spurs looked in control before Adebayor's red card, a moment of madness that may have contributed to a third straight league defeat.

Boss Andre Villas-Boas said Tottenham chairman Daniel Levy spent all week telling him how vital it was to win at Emirates Stadium.

That message was heeded by his players early on, the decision to start two strikers in a 4-4-2 formation paying off.

Adebayor and Jermain Defoe were causing Arsenal's defence all sorts of problems and moments after William Gallas had seen a strike ruled out for offside, Spurs were ahead.

Mertesacker and Sagna both inexplicably stepped up to let Vertonghen's long ball send Defoe clean through.

His low drive from the left was repelled by Wojciech Szczesny - starting his first match in two months following an ankle injury - but Adebayor was on hand to tap home the rebound.

Arsenal were struggling for any sort of rhythm and Aaron Lennon dragged an effort inches wide as Tottenham pressed for a second.

The dismissal of a player who left Arsenal for Manchester City before joining Tottenham gave the home players and fans a noticeable lift.

Hugo Lloris, making only his second league start in goal in place of Brad Friedel, could do nothing to stop the equaliser and prevented a second when Giroud glanced Wilshere's free-kick towards the top corner.

The pressure began to mount, though, and after Cazorla swerved a drive just over and Lloris again denied Giroud, Arsenal went ahead.

A neat interchange between Mikel Arteta and Wilshere set up Podolski and his finish bobbled into the net via Gallas.

It was now a case of damage limitation until the break for Tottenham, but they were breached once more in stoppage time.

Webb played an advantage that enabled Cazorla to supply a low cross from the left for Giroud to sweep home first time, despite Gallas and Vertonghen being in close attendance.

Villas-Boas replaced full-backs Kyle Walker and Kyle Naughton with centre-back Michael Dawson and forward Clint Dempsey - switching to 3-5-1 - and his team started the second half with tempo.

But Arsenal used their numerical advantage to avert the danger before targeting their opponents on the counter-attack.

The tactic was rewarded when Walcott fed Podolski on the left and his perfectly-weighted centre was easily converted by Cazorla.

Arsenal had a two-goal cushion but looked nervous, and Defoe somehow failed to connect with a Bale corner from close range.

But as Spurs began to tire, Gunners boss Arsene Wenger introduced Alex Oxlade-Chamberlain and he set up Walcott to complete the win.