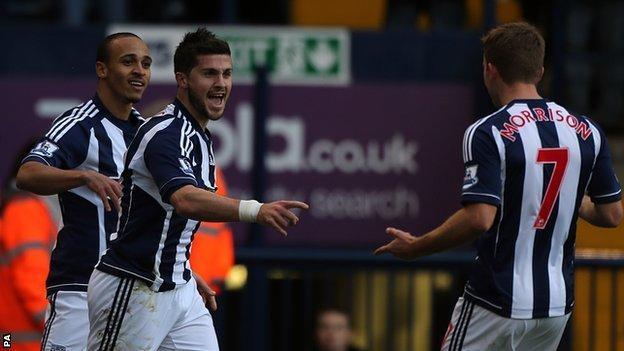 Chelsea went a fourth league game without a win as they were beaten by the top flight's surprise package West Brom at The Hawthorns.

Chelsea were denied a spot-kick for Claudio Yacob's shove on Victor Moses and Daniel Sturridge failed to take two late chances as the Baggies held on.

Sturridge raced through on goal only to have his shot saved by Baggies keeper Boaz Myhill before he had an angled shot across goal go wide.

The visitors' second-half pressure was almost incessant but not enough to bring them a point, while victory moved the bouncing Baggies - managed by ex-Chelsea player and assistant manager Steve Clarke - up to fourth place and just a point behind Chelsea.

It was West Brom's sixth home league win in seven games this season.

Albion also beat Chelsea at The Hawthorns last season, a defeat that resulted in Andre Villas-Boas being sacked as Blues boss and former Baggies boss Roberto Di Matteo taking over.

Di Matteo went on to taste Champions League and FA Cup glory so he might have had a degree of satisfaction in returning to the club who dismissed him as manager in February 2010.

"What a big scalp that is for Steve Clarke and West Brom. Chelsea threw everything at Albion in the second half but couldn't find a way through. Most of the Premier League is now looking up at West Brom as their fantastic start to the season continues. The home side had heroes all round against Chelsea."

That did not last long, however, as his risky move in making five changes with Tuesday's crucial Champions League game at Juventus in mind backfired.

Chelsea had gone close early on when Sturridge and Moses combined to set up Ryan Bertrand for a shot that was cleared off the line by Liam Ridgewell. Hazard pounced on the loose ball and his shot might have produced a penalty as it appeared to strike defender Jonas Olsson's arm.

But referee Michael Oliver did not award a spot-kick and the Baggies capitalised by taking the lead themselves, Zoltan Gera slipping the ball to James Morrison, whose cross to the far post was headed in by Long.

The visitors struggled to get back on level terms as West Brom, who blended a tigerish work-rate with an assured passing game, showed why they have made their best start to a season in 30 years.

Chelsea, though, kept probing and Hazard equalised when he met Cesar Azpilicueta's cross with a far-post header that took a touch off right-back Billy Jones on the way in.

The Blues appeared to have seized the impetus but, after Sturridge had a shot on the turn saved by Myhill, the visitors again fell behind.

This time Long was the provider as he whipped in a cross for Odemwingie, whose glancing header went in through the legs of keeper Petr Cech.

Di Matteo was forced to throw on Oscar and Juan Mata for Oriol Romeu and the ineffective Fernando Torres, and the move almost immediately worked.

Moses was denied a penalty for a shove by Yacob before Mata's chipped ball found Sturridge, only for his flicked shot to be instinctively saved by Myhill.

Myhill was developing into one of Albion's star performers and he again came to his side's rescue when he saved another Sturridge effort.

Sturridge has pushed his claims for a starting place but he did not help his cause as he failed to take the opportunities that came his way.

He had a clear sight of goal in the final minutes of the match only to drag his effort wide as another Chelsea chance went begging.