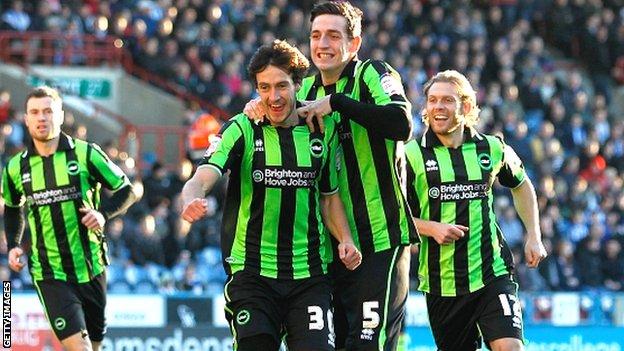 Will Buckley marked his return for Brighton with two first-half goals to help his side leapfrog Huddersfield into seventh place in the Championship.

Buckley gave the visitors a fifth-minute lead with an unstoppable shot from the edge of the area.

Their advantage was doubled when Buckley arrowed a low shot from 12 yards into the bottom corner.

It was a third home league defeat of the season for Simon Grayson's side as Brighton secured a fourth win on the road.

Ashley Barnes spurned two chances to extend the lead, first dragging his low shot from the edge of the box just wide and then heading Andrea Orlandi's corner over the bar.

Huddersfield had to wait until the 25th minute for their first effort on goal as Adam Clayton fired wide from 30 yards.

Church, in his second game for the Terriers after joining on loan from Reading, headed just over the bar before Brighton struck again.

Craig Mackail-Smith played the ball in from the right and Buckley finished across Alex Smithies and into the bottom corner.

Huddersfield started the second half with more purpose, but found clear-cut chances hard to come by until Lee Novak headed wide.

Brighton went close to adding a third but Buckley's goalbound shot from the left was brilliantly turned away at full stretch by Smithies before Church's late strike for the hosts.

"You always know Gus [Poyet's] teams are going to be composed and we probably contributed to our own downfall by not getting at them.

"It's a learning curve for us and I have told the players that when we lose matches we have to understand why we've lost so we can get better.

"Brighton have spent some money over the last couple of years with players like Mackail-Smith and Buckley, and if they are not thereabouts at the end of the season they will be disappointed."

"Three hours ago we were one win in nine and people were saying that was terrible.

"Now they are saying we are unbeaten in five and it's fantastic.

"We are a good team and difficult to play against. I am happy for the players.

"Sometimes football is fair and you get three points but other times you have to take it on the chin and go home.

"We have had to battle and some of our players are not used to that type of football. It's a learning curve."