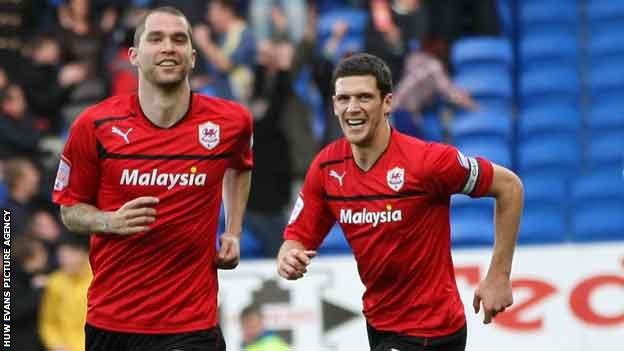 Their 1-0 victory saw them leapfrog Middlesbrough and hand the visitors their first defeat in nine games.

Recalled because of an injury to full-back Kevin McNaughton, Connolly's fourth goal of the season - aided by skipper Mark Hudson, whose run distracted the Middlesbrough defence - settled an encounter bedevilled by five substitutions due to injuries.

His goal came after the hosts' first casualty, Ben Turner, limped off to be replaced by 18-year-old Ben Nugent, who came on for his league debut.

Leadbitter then spotted David Marshall off his line but the Cardiff goalkeeper was equal to the Middlesbrough captain's effort, tipping his shot over the bar.

After substitute Joe Ralls brought Emanuel Ledesma down, the Argentine's powerful shot beat Marshall but cannoned off the crossbar.

Scott MacDonald then squandered a fine chance after being released by Ledesma's clever chip, lifting the ball over the bar as Marshall charged out to narrow the angle.

After the break Whittingham's clever low free-kick brought a good save out of Boro keeper Jason Steele.

At the other end the introduction of Marvin Emnes gave the visitors some impetus.

But Bellamy's entry to the fray on the hour mark was equally effective for the home side, and the Bluebirds survived Boro's late attempts to level.

"I'm delighted with the character of the team and the fact we kept another clean sheet at home. But that is no surprise to me because I see that from the players every day.

"Middlesbrough had been on a roll and we knew it would be a tough game. But it became tougher when we lost two players after 20 minutes.

"We had to put young players in and they did brilliantly well.To show that resilience against a good team showed the commitment to the cause and there are no egos at this club."

"I thought we played pretty well. There is a long way to go in the rest of the season and if we perform like we did today for long spells then we will be okay.

"Cardiff are a resilient side who defended well and put their bodies on the line. They had to do that. But they got their noses in front. With Peter Whittingham's left foot, they are dangerous from set-plays and they scored from one.

"But the longer the game went on the chances came and went for us and, ultimately, we didn't manage to stick one in the back of the net. I picked a team to win the game."