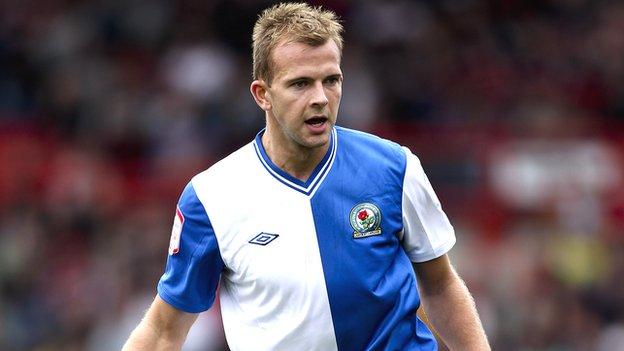 A Jordan Rhodes hat-trick helped secure Henning Berg his first win as Blackburn manager, lifted Rovers into the play-off places, and sent Peterborough to the bottom of the Championship table.

Mauro Formica slotted the visitors in front before Rhodes headed in Martin Olsson's cross and then converted Ruben Rochina's pass to make it 3-0.

He then nodded home, unchallenged, for his ninth career treble.

It was the home side's fourth defeat in November and sees them slip to the foot of the Championship on goal difference.

For Blackburn, this was a first win since 27 October and Berg's first victory in four matches as manager.

Rovers struck early thanks to a devastating counter-attack, Rhodes wriggling into space before finding Formica with a deflected shot. The Argentine calmly found the net from six yards.

The visitors almost got another as a silky move ended with Rochina curling a shot from 20 yards that Robert Olejnik pushed behind.

Their lead was doubled when Martin Olsson centred for Rhodes to head home from six yards, although there was a hint of an own goal after the ball hit the hand of Nathaniel Knight-Percival before going in.

Peterborough had no answer as the ex-Huddersfield striker, 22, struck again before half-time, stroking past Olejnik after Rochina's through ball.

Saido Berahino tested Paul Robinson in the opening minutes of the second half with a swerving effort that he pushed over the bar.

They went even closer minutes later when Grant McCann's dipping effort bounced the wrong side of the post.

But Rovers still posed a threat and Rhodes rounded Olejnik but placed his shot wide, Markus Olsson struck the bar and Olejnik got down well to push Martin Olsson's drive over the top.

Their pressure told from the resulting corner, though, when it was headed into the six-yard box by Scott Dann and Rhodes made it 4-0.

They almost had a fifth as Rochina's 25-yard shot was deflected on to a post, and Morten Gamst Pedersen's rebound was ruled offside.

Olejnik saved brilliantly from Rochina and then managed to divert a Nuno Gomes rebound onto the woodwork before the end.

"We had started the game brightly so to concede such an early goal was a big blow, but I give credit to my players for not going under against a team with a hell of a lot of decent players.

"A lot of people might have thought Blackburn would go on to get five or six but we stuck to our task and kept looking for the ball. I really enjoyed watching some of our football and we got control of the midfield, but matches are won in both boxes."

"It was a fantastic feeling to see my team produce a performance like that. Crystal Palace needed two very late goals to beat Peterborough and Brighton had to score in injury time to do it, so going in front so early was key.

"The difference between that display and our previous games was the quality of our play in the final third. We already know Jordan [Rhodes] is a great finisher and he proved that again. He did brilliantly in League One last season and is already doing well in the Championship. Hopefully next season he will be in the Premier League with Blackburn."