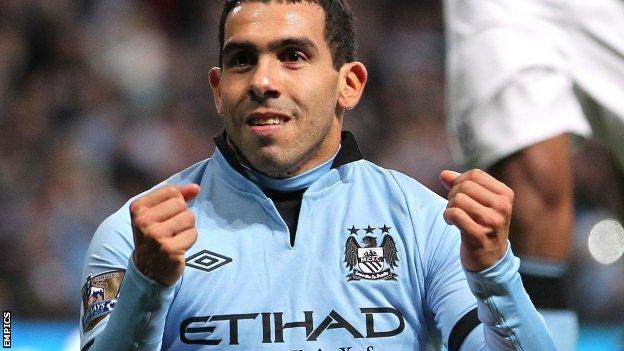 Sergio Aguero and Carlos Tevez both scored twice as Manchester City thumped Aston Villa to move top of the Premier League for the first time this season.

But the hosts took charge when Andreas Weimann was adjudged to have handled and Sergio Aguero scored from the spot.

Carlos Tevez added another penalty after Barry Bannan's handball, Aguero made it 4-0 with a deflected shot and Tevez tapped in Samir Nasri's cross.

Manchester United's shock defeat at Norwich later on Saturday meant City stayed at the summit. The size of Villa's defeat, together with Reading's victory over Everton, leaves them in the relegation zone.

In the end, this win for the champions was every bit as convincing as the scoreline suggests but Villa boss Paul Lambert will argue his side were in the game until the 54th minute, when City scored their second goal from a debatable decision.

Referee Jon Moss pointed to the spot after his assistant Adrian Holmes spotted a near-post handball by Weimann from Silva's corner, but replays showed Weimann made no contact and none of City's players appealed for a penalty.

Once Aguero scored to give them breathing space, the champions did not look back - and could have had more goals if Scott Sinclair had been more ruthless after coming off the bench.

The result leaves Roberto Mancini's men - the only unbeaten side in the division - above their neighbours, having conceded the fewest league goals and with the best goal difference.

They did not have things all their own way against Villa, however, the visitors frustrating them before half-time and also creating some decent chances themselves.

And the City keeper, under renewed scrutiny following his unconvincing performance for England against Sweden on Wednesday, came to his side's rescue again when he dived to keep out Christian Benteke's bouncing header.

City, meanwhile, were seeing far more of the ball but were unable to break down Villa's determined defence.

Tevez and Yaya Toure were reduced to shooting from distance and Mancini might have been contemplating an early introduction of Edin Dzeko, who again started on the bench despite last week's heroics against Tottenham.

But there was no need for a super-sub on this occasion.

City forced Brad Guzan into his first save of note just before the break, when he tipped Tevez's skidding effort round his post.

And Villa's resistance was broken from the resulting corner, with Kompany knocking the ball goalwards from Nasri's delivery and Silva darting in to fire over the line from close range for his first goal of the season.

More was to follow after half-time, but only after Holmes's decision, which Weimann continued to dispute as he was substituted and then again at the final whistle.

City's second penalty was more clear-cut, Bannan handling the ball while he was on the ground as Silva went round him in the area.

This time Tevez was given the responsibility from the spot and he sent Guzan the wrong way.

By now City were rampant and Villa's earlier organisation nowhere to be seen.

Aguero got his second when his shot took a touch off Enda Stevens and beat Guzan at his near post.

And Tevez made it 5-0 from close range after Nasri's ball reached him at the far post.