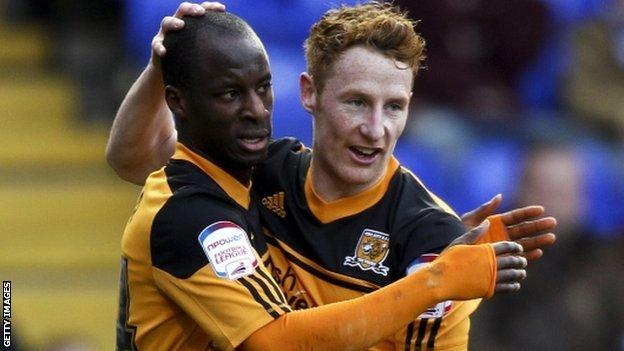 Sone Aluko scored twice against his former club to help Hull see off Birmingham in a pulsating encounter.

Aluko ran clear twice to put the Tigers in command inside 30 minutes and James Chester headed home the Nigerian's corner to make it 3-0 soon after.

Zigic's header set up Marlon King to pull another goal back at the start of the second half but Hull held out and remain fourth in the Championship.

Aluko, 23, came through the ranks at Birmingham and spent more than 10 years at his boyhood club before leaving in 2008.

He was making his first return to St Andrew's, and quickly made an impact.

Aluko beat the offside trap for the first time after only six minutes but saw his shot blocked by Birmingham keeper Jack Butland.

The home side did not learn their lesson, however, and Aluko soon escaped again - this time rounding Butland to score.

Birmingham's defence continued to keep a high line up the field and Aluko took full advantage to add his second goal after 26 minutes.

Hull keeper Ben Amos was called into action for the first time when he saved at the feet of Zigic but things got worse for the home side when Chester met Aluko's inswinging corner to make it 3-0.

Only then did Birmingham find a response, with Morrison scoring his first goal since joining on loan from West Ham in August, and Tigers defender Abdoulaye Faye lucky not to then give away a penalty for handball.

The fightback gathered more momentum when Blues scored their second goal just 21 seconds after the break, but Hull denied them any more clear-cut chances.

In fact the Tigers had opportunities to make the game safe, with Stephen Quinn dragging a shot wide and substitute Aaron Mclean heading over.

And Hull boss Steve Bruce, a former Birmingham player and manager, was able to celebrate his side's first win at St Andrew's since 1970 and only their second victory there in more than 100 years.

"We are all devastated. The only thing to be pleased about was showing some character to come back with two goals.

"If you don't win your home games you are not going to be in the play-offs. We know what is wrong and we will put it right.

"You should not have to score four goals at home to win. But while we collapsed against Barnsley I thought against Hull we could have got back into the game."

"It was an unbelievable turnaround. But credit to Birmingham they stuck at their task just when I thought the crowd would turn against them. They played their part. Birmingham kept flying the ball into big (Nikola) Zigic and that is the best I've seen him play.

"The team talk at half-time was to keep it tight and they scored again after 12 seconds. It just shows what rubbish you talk.

"But I thought some of our football in the first half was very good. I have some really good players and the way Aluko is playing is there a better player in the Championship? He has been excellent for us."