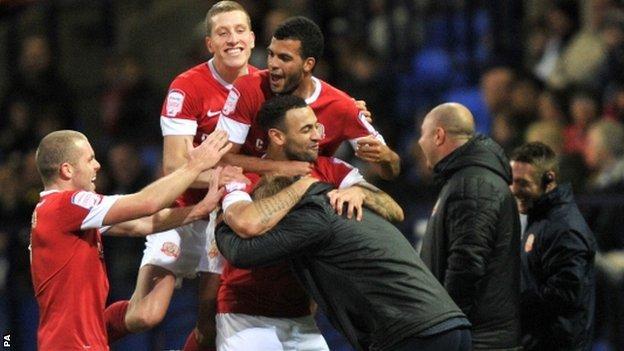 Barnsley ended a run of four straight Championship defeats thanks to Craig Davies's equaliser against Bolton.

The Tykes had the best early chances before Kevin Davies put Bolton ahead, controlling Chris Eagles's cross before finding the bottom corner of the net.

Bolton were left to rue their inability to take their chances and were also unhappy with the performance of referee Carl Berry.

Berry was booed off at half-time after blowing for a Barnsley foul when playing advantage would have allowed David Ngog to run through on goal.

But Steele played a prominent part in keeping his side in the game, making several saves from Mark Davies before Craig Davies grabbed the Tykes' equaliser.

The Welsh international, who had been out for almost a month with a hamstring problem, found the net with a shot that went in via Adam Bogdan's right-hand post.

Both sides had opportunities to take all three points in a thrilling finale.

At the other end, Marcus Tudgay saw a close-range effort scrambled away.

The draw means Barnsley are three points clear of the relegation zone, five points behind Bolton.

Bolton boss Dougie Freedman on referee Carl Berry: "Until referees at this level, which is a very important level, are full-time, I can't criticise the referee.

"The Premier League has got 18 full-time referees and that's the reason they're a lot better.

"Full-time is the way to go. They must be full-time trained, full-time fitness-wise and helped with things so they will understand the game more.

"I thought Kevin Davies was fantastic today but I just felt the referee didn't understand what he was doing. You can't blame him; you've got to blame the system.

"The poor guy has probably been asked to work all week to fend for his family and then he is asked to turn up in a stadium and make big decisions. It's unfair."

Barnsley manager Keith Hill on his team's reaction to going behind: "It could have ebbed away at the little confidence we had, but it didn't and we looked strong in the second half.

"I'm really pleased with that and I just hope it gives the players a bit more confidence.

"We're happy with a point with respect to the results we've recently had. We can't complain and won't complain."