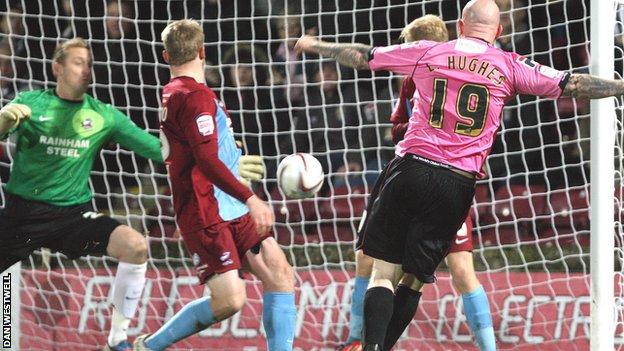 Notts County twice came from behind to draw with Scunthorpe in League One.

Christian Ribeiro's curler after a one-two with Mark Duffy put the home side ahead, before Lee Hughes levelled with a header from Alan Judge's cross.

Damien Mozika's close-range finish put the Iron ahead again but they were then reduced to 10 men when Paul Reid was sent off for a foul on Yoann Arquin.

Hughes touched in at the back post to make it 2-2 and stretch the Magpies' unbeaten away run to 18 matches.

Notts slip out of the play-off places, while Scunthorpe remain in the relegation zone but Brian Laws extended his unbeaten run to three league matches since at the end of last month.

Both sides hit the woodwork, with Scunthorpe's Leon Clarke putting a header against the crossbar, while Hughes saw an effort come back off a post.

Notts also had a goal disallowed for offside when Hughes added a deft touch to Alan Sheehan's long-range shot.

"Let me tell you, Lee Hughes. He stood on the park and he's actually scored the second goal when he should have been sitting on his backside with [Paul] Reid.

"He's absolutely smashed Rob Newey in the face and we saw it on the touchline. The linesmen should have seen it, the referee didn't see it.

"On the DVD it's the clearest I've ever seen a forearm smash on a player and yet he's gone and got them a point out of it.

"So is there justice in the world? Well probably not today."

"If you don't defend properly in wide areas and you let the ball into your box with ease, then the likelihood is that you get punished.

"It is frustrating as I thought in the first half we dominated and controlled the game.

"We had a lot of good passages of play but I thought we gave away cheap goals. Overall it was very pleasing but we just gifted them goals."