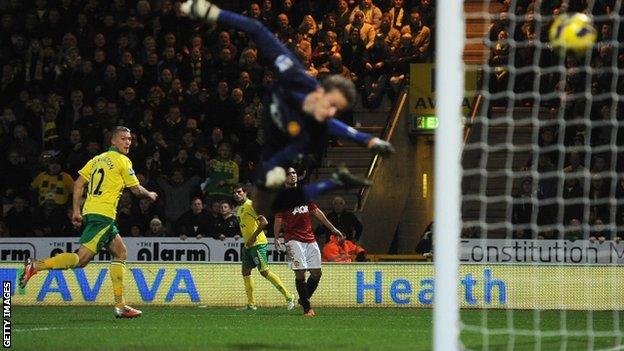 Norwich recorded only their second win over Manchester United in 15 league matches thanks to a brilliant headed goal from Anthony Pilkington.

The ex-Huddersfield forward struck 30 minutes from time when he flicked in Javier Garrido's cross from the left.

United, who had been usurped at the top of the table by rivals City coming into the game, looked well below their best.

Ashley Young's shot was saved by John Ruddy, who also tipped over a header from his own player Sebastien Bassong.

The England goalkeeper would have expected a busier evening, but both he and his team witnessed a flat performance from the visitors.

Although the 19-time champions have bounced back from such setbacks many times, what might be of concern to manager Sir Alex Ferguson is their lack of creativity from midfield, particularly from the centre.

In a flat 4-4-2, Ryan Giggs was ineffective, bar one deft ball over the top. And bringing on Paul Scholes, who turned 38 this week, was a clear sign of their lack of depth in this area.

Nonetheless, they came into the fixture in good form, with nine wins from their previous 10 league fixtures.

But Norwich, who had kept three clean sheets in their last four league outings, were certainly not going to lie down.

While another shutout seemed a step too far for the Canaries against a trigger-happy strikeforce of Robin van Persie and Javier Hernandez, the home defence showed that their recent improvement was no flash in the pan.

"One of the greatest results in Norwich City's recent history.

"A wonderful goal from Anthony Pilkington, a wonderful result for Norwich City and a fantastic performance from John Ruddy.

It was a red letter day as they beat the Red Devils."

Norwich manager Chris Hughton mentioned prior to the match that fielding the same centre-back pairing in recent weeks had helped his side's performances and neither Bassong nor Michael Turner let him down.

Turner was particularly impressive, consistently getting in front of his man Hernandez to clear.

In fact, during that first half United managed to get behind the Canaries backline only on a handful of occasions - and only once did they give the home side the jitters.

That chance for last season's runners-up was conjured up shortly before half-time when Giggs floated a pass into the area which Van Persie allowed to drop over his shoulder. But the Netherlands international made a mess of his footwork, much to the amusement of the home support.

Norwich created the best opportunities during the opening period with former Leeds forward Robert Snodgrass flicking a header a fraction wide before narrowly failing to get a connection on Pilkington's driven cross.

The Canaries seemed to have the freedom of the wings to cross the ball into the United area, although rarely did they pose problems for Chris Smalling and Rio Ferdinand - that was until the 60th minute.

Spaniard Garrido, on loan from Lazio, once again took advantage of the space afforded to his side out wide and delivered a flat-flighted ball into the area which Pilkington beautifully guided past the reach of Anders Lindegaard.

It was 11th time in 18 matches that United had fallen behind this season - but they had won 15 points in the league having been in losing positions.

Ferguson brought on forward Danny Welbeck, who scored for England in midweek, and veteran Scholes with 20 minutes remaining.

Welbeck threatened on a couple of occasions, but the closest the visitors came to escaping with a point in the closing stages was when Bassong inadvertently forced Ruddy to tip his header over the bar.

Late in the game, Jonny Howson had a chance to add a second for Norwich, but he messed up his lines after being put clean through.

Luckily for him there was no late heartache for his team, who climb to 13th in the table.