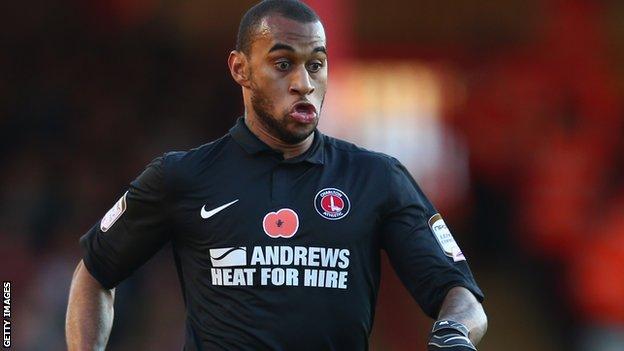 Danny Haynes scored his third goal in as many games as in-form Charlton overcame Burnley at Turf Moor.

Trippier was shown a straight red after just 15 minutes when he was judged to have handled on the goal-line during a penalty box scramble.

Three in a row for Charlton

The last time Charlton won three second-tier league games in a row was November 2007, when they enjoyed a four-match winning run before losing at home to Sheffield United.

Charlton have now won their last three league games - their most successful sequence at this level for five years.

A spirited Burnley created enough chances to have secured at least a point but were wasteful.

Charlie Austin collected his Championship player of the month award on the pitch before kick-off and almost added to his 20-goal haul in the 12th minute, heading Trippier's cross over the angle of post and bar.

But Trippier lasted a few more minutes before he was dismissed soon after Charlton full-back Chris Solly had rattled the post.

Grant superbly turned Jackson's spot-kick around the post but Charlton continued to threaten, with Haynes slicing an 18th-minute volley wide.

The 10 men were almost ahead after the half hour through Brian Stock's rasping 30-yard shot before Michael Duff was also denied.

But Charlton secured the points when Hulse headed back across goal to leave former Ipswich player Haynes with a simple finish.

"I think the sending off is difficult. I've seen it again and it looks like the ball has hit him rather than him hit the ball. But what can you do?

"It's a tough call and you get away with some but we didn't. Referees have a tough job to do but we probably haven't had our fair balance over the last couple of weeks. You hope that evens itself out over the season.

"We created a number of chances and took on the game with 10 men. The result doesn't always match the reality of the game and that was the case."

"It's a real tough place to come and they have been doing very well at home since Sean Dyche came in, so we knew it would be a tough game.

"We've come away from a hard-fought game, with some contentious issues, and got the three points which you have got to do in the Championship. It is quite an unforgiving league but we are in a good place at the moment.

"It was a well-worked goal and we had to be professional and see the game out. I thought we did that and we got the clean sheet which was pleasing."