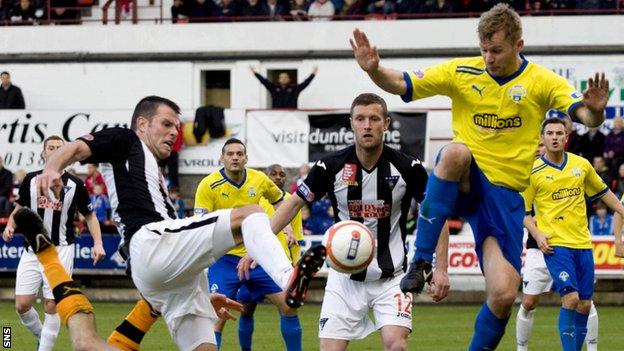 "Enough folk have said they will help that, if it all comes in, we should be fine."

Dunfermline are believed to be about £8m in debt, but the club stress that none of the money owed is to a bank - present and past directors are the main debtors - and that they have no overdraft.

And Yorkston said money to pay the latest tax bill would come from a variety of sources, including supporters, with one group organising a sponsored walk to the next away game, in Kirkcaldy against Raith Rovers.

"We were playing six-figure bills quarterly before, the difficulty this time being the projected income, with five or six weeks between home games," he told BBC Scotland.

"We have a famine in November but a feast in December and early January, with two derbies and a share of the Scottish Cup income from the match against Partick Thistle.

"Everybody has tax issues and we always knew this was going to be our most difficult and awkward month with only one home game, against Dumbarton.

Problems at Rangers and Hearts led business recovery firm Begbies Traynor to suggest this month that six clubs in Scotland's three top divisions were showing signs of distress at the end of October.

The old Rangers have gone into liquidation with a new company now operating in Division Three, while Hearts have appealed to supporters to help raise £2m required to avoid liquidation by the end of the season.

Dunfermline, who have already cut costs since relegation from the Scottish Premier League, last month delayed the full payment of staff wages.

However, Yorkston insists the situation is not as serious as that facing Hearts, who are under a signing embargo by the SPL after two consecutive months of delayed salaries.

"The sums with us are much smaller, but we wish Hearts well and hope they will get through their own problems," he said.

The news of Dunfermline's financial problems comes after the club announced a boardroom re-shuffle in which Yorkston will stand down as chairman at the end of the season.

The 58-year-old explained that he was anxious to avoid any conspiracy theories over his departure if an announcement was left until then.

"I thought it would be appropriate to announce it now rather than wait until May," he said.

"I didn't want to leave at a difficult time for the club, so it would be good if I could stand down after being promoted next summer.

"But I will still be involved on the board."