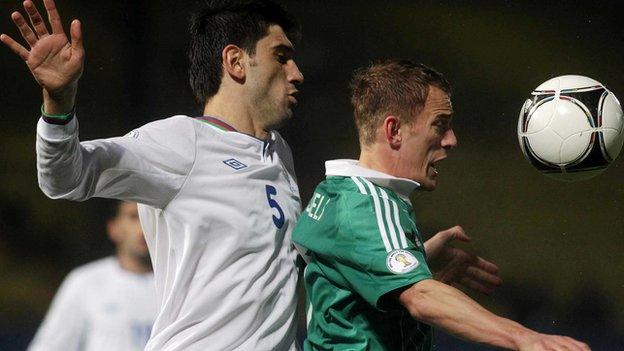 David Healy equalised in the sixth minute of injury-time to salvage a draw for Northern Ireland in their World Cup qualifier against Azerbaijan.

Substitute Healy netted the last-gasp leveller from a free-kick, but NI have now gone 11 games without a win.

The home side were aiming to build on last month's heroic 1-1 draw in Porto and they crafted the first chance after three minutes.

The in-form Niall McGinn delivered a pinpoint cross but Kyle Lafferty sent his six-yard header over the bar.

Aliyev scored with Azerbaijan's first attack, his long-range effort bending inside the post for a fifth-minute opener.

Kyle Lafferty and McGinn had weak efforts saved as the hosts regained control and pushed for the equaliser.

Steven Davis put Lafferty clear on goal but the first touch of the striker, who plays for Swiss side Sion, was poor and allowed keeper Salahat Agayev to block at his feet.

Daniel Lafferty, making his competitive debut, squandered the final chance of the opening 45 minutes by heading over from close range.

The frustration continued on the restart with another excellent opening, this time Cathcart chesting down and volleying over from six yards.

Kyle Lafferty became Northern Ireland's second player to be booked for diving and he is suspended for March's qualifier against Russia in Belfast.

Carroll made an impressive block to deny Jihan Oskara as he raced clear on goal in a rare foray forward from Azerbaijan.

Baird was guilty of two glaring misses - his backpost header flying across goal and wide before again heading off-target with just Agayev to beat.

There was further misery for the Fulham midfielder when he picked up a booking after arguing over the position of a free-kick - he is also banned for the Russia qualifier.

The boys in green were finally rewarded for their efforts deep into injury time, with Healy firing his 20-yard free-kick wide of Agayev and into the net for his 36th international goal.