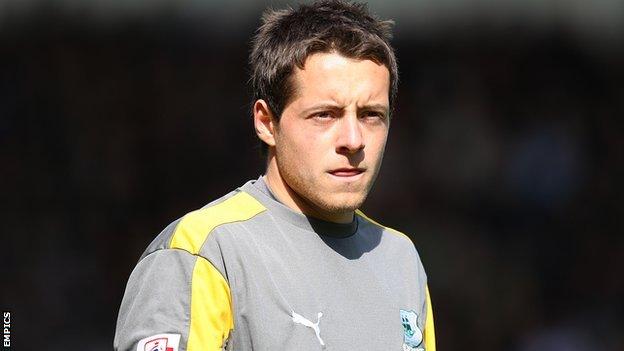 Goalkeeper Luke McCormick will play his first match since being released from prison for killing two children in a car crash in 2008.

The 29-year-old will play for Blue Square Bet South side Truro City in their FA Trophy clash at Farnborough.

McCormick was jailed in October 2008 for killing two children in a car crash, and served half of his four-year-and-seven-month sentence.

His last match was for Plymouth Argyle in May 2008 at Wolves.

Truro City are in need of a goalkeeper after their regular, Tim Sandercombe, was injured last week.

McCormick has been training at Swindon but was let

He was offered a chance to work with their youth team while embarking on a community project, but decided against the role.

McCormick was playing for Argyle at the time, and the club terminated his contract by mutual consent after he had been charged and bailed.

When it first emerged McCormick had been training with Swindon since January - while he was on day release - the parents of the victims voiced their anger about his return to the game, telling the Sun: "Swindon might be a family club, but now they're hiring a man who has torn my family apart."

Manager Paolo Di Canio said: "We were happy to help a person who had paid his price.

"But I don't think it was right to sign him as we are not a recovery clinic."