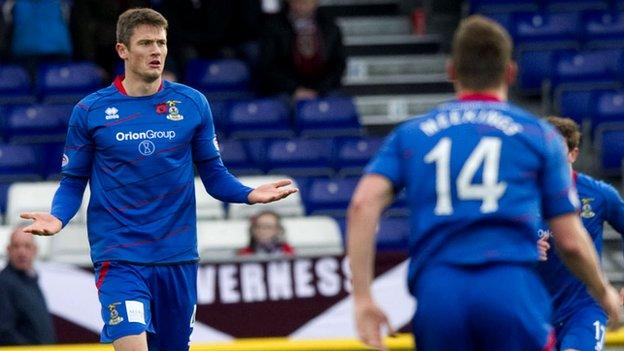 Inverness Caledonian Thistle manager Terry Butcher was left fuming at the award of a late penalty to Hearts, but refused to take it out on referee Willie Collum.

The Highland side stretched their unbeaten run to 10 games courtesy of a 1-1 draw with John McGlynn's men at the Caledonian Stadium.

"I've already been banned once from the dug-out this year," said Butcher.

"I don't want that again, so I try to be more level-headed on the sidelines."

Marius Zaliukas converted the spot-kick awarded with only a minute left of regulation time. That made things all-square after Owain Tudur Jones had given the home side a 19th minute lead through an excellent 25-yard strike.

Butcher is keen to develop relationships with referees for the good of the Scottish Premier League as a whole.

"The referees are in a very difficult position and we've got to try and support them," he said.

"But I do think we do need to talk to them more, we do need to find out from them about an advantage or simulation or second-phase play or offside.

"We talk once a year - the managers, coaches and referees. They tell us the new rules and what's going to happen this year - and that's it.

"I still feel they could have more get-togethers to say 'how's the season going and what are the talking points? How can we work together and improve the product?' "

It was Jones' who conceded the penalty after earlier notching his first ever goal for the club. He was judged by Collum to have fouled Hearts forward Callum Paterson.

"I was off and I was angry - I was smashing things up in my own dressing room," said Butcher, who wants his players to maintain the high standards shown so far this campaign.

"Today was more frustration because we've played really well this season. We should've won the game and we had opportunities to get the second goal and didn't.

"For the fourth or fifth time a team has scored against us in the last five or six minutes of a match and stopped us winning the game."

"It's such a unique experience for my players," added Butcher. "It's heady stuff and sometimes it's how you accept that or deal with that that determines whether you do win the match or not.

"I don't think we dealt with it well today because we looked sluggish and not as fired up as we have been in the past."