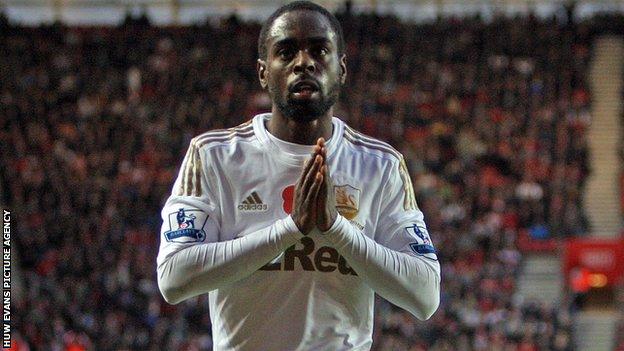 Swansea goalscorer Nathan Dyer has admitted to feeling frustrated at watching from the sidelines during recent weeks.

Dyer came off the bench to rescue Swansea at Southampton after Morgan Schneiderlin had put the Saints ahead.

The 24-year-old has not started a league game since 6 October and was keen to make the most of his chance.

"Obviously it's frustrating - every player wants to play every game," he said.

"There's a lot of competition in in all areas of the team.

"Since I've been at Swansea I've played the majority of games so it is frustrating watching.

"All you can do is keep training hard, keep being in the manager's eye and come on the pitch when you're given the chance and do what you can do.

"I've been out for a couple of games now and not started for about four games. For me it's just taking my opportunity when I do get it.

"When we went 1-0 down we needed that goal to get us back in the game. The gaffer wanted to make a change and I'm just thankful I came on and had my opportunity.

"He just tells you to go on and play your own game and he knows what I can do.

"I like to get at defenders and I just anticipated a back-pass and I pounced on that and made it count."

Dyer's equaliser against former club Southampton was his second goal in three games for Swansea after scoring in the 3-1 Capital Cup win at Liverpool.

He also struck twice in the 5-0 win over QPR on the opening day of the season in August - the last time Swansea had scored away from home in the league.

The Swans ended a run of three successive away defeats at St Mary's and Laudrup's side remain 11th in the Premier League table.

"It was really nice to get a goal for myself, coming off the bench," Dyer said.

"I just wanted to get an opportunity and thankfully I took that.

"We wanted the three points but we've come away with a draw and we'll take the one point.

"It's the first time I've come back to Southampton since I left and they'll always be in my heart.

"It's a team I grew up playing for since I was eight years old. I'll always have massive respect for the team and the city.

"I wanted to keep my celebrations minimal but it was nice to score for myself and my team."