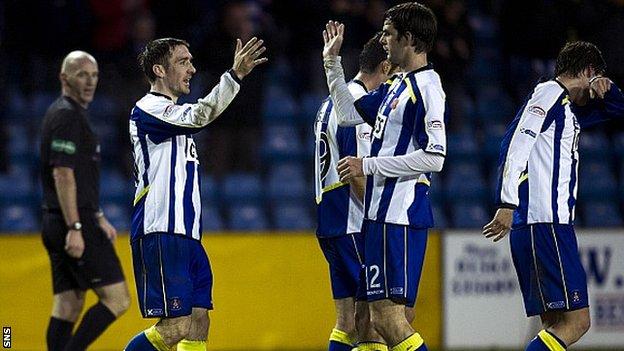 Kilmarnock boss Kenny Shiels was thrilled to see Paul Heffernan net a double in the 3-0 win over Ross County.

However, Shiels warned that the striker, who was making his first start of season after a shoulder injury, is not guaranteed a place in the team.

"He did very well," he told BBC Radio Scotland. "But it doesn't mean that he starts the next game.

"We have got to get some of the young boys through and we sacrificed that today by bringing in senior players."

Heffernan celebrated his return with a brace either side of a super strike from Gary Harkins, who was also making a return to the first XI.

"It was a good game of football and Ross County made a fantastic contribution," added Shiels.

"After the 0-0 draw with them earlier in the season I said we should both get points taken off us as it was boring game.

"But this time both teams contributed to a really good game of football."

Shiels was in no doubt that his side thoroughly deserved the margin of their win but knows he is under pressure to develop players with a sell-on value to the Ayrshire club.

"I played experience today and we can't play our strongest team and sacrifice our youth development," he explained.

"But today was not a development day and we showed a lot of creativity and created about 10 or 12 chances. The movement of the front two pleased me but the work rate throughout the team was great.

"We had a couple of efforts cleared off the line in the first half and at half-time I told the players that we were the more likely team to score and after we did in the second half we took command.

"I would say we were shades in front before we got the first goal but Ross County were threatening.

"We were frustrated because we were knocking on the door for so long. We had a couple cleared off the line.

"Their keeper spilled a couple and there was an obvious penalty that wasn't given."