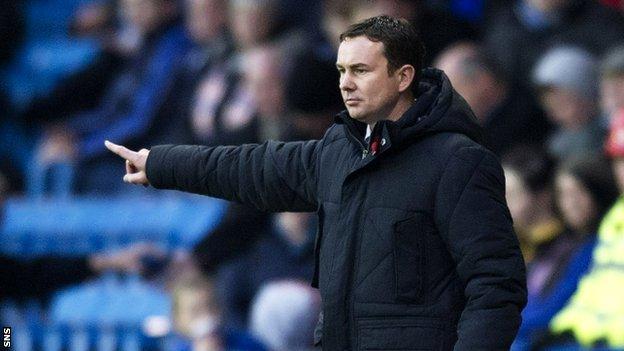 Ross County manager Derek Adams said his side had no fear of relegation, despite

Goals from Paul Heffernan, twice, and Gary Harkins left County without a point from their long journey.

But Adams insisted he was confident of Scottish Premier League survival, despite a three-game unbeaten run coming to an end.

"We've got the pool of players to do that, of course," he told BBC Radio Scotland's Sportsound.

"Come January we'll go again and we'll sign some more players and strengthen where we need to strengthen.

"It's a tough league, very competitive, and we're enjoying it."

Adams felt that the result was unjust on his players, particularly after Rocco Quinn and Steven Ross missed good first-half chances.

"I thought the first half we played very well," he said.

"We had probably two of the better opportunities and I thought we caused Kilmarnock a number of problems.

"It's all ifs and buts, and players have got to take that opportunity. Kilmarnock were the first team to score and they gained confidence from that."

"They've got a good squad of players," he added.

"It's always a difficult place to come to; it's a beautiful playing surface, which suits them, and today they got the benefits of that."