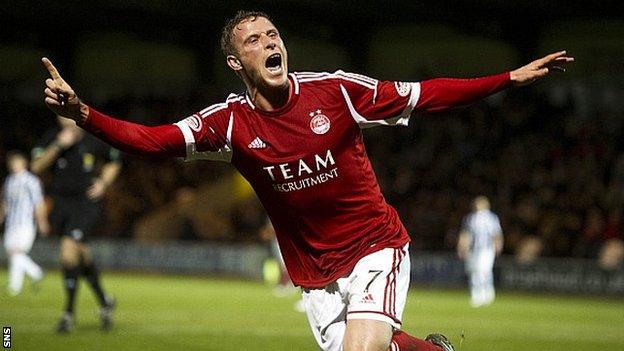 "Celtic have such resources and such ability. I would be astonished if Celtic don't win the SPL."

"I thought that was a fantastic performance from Celtic," said Brown.

"You're not going to try and tell me that they can't replicate that in the SPL and win the SPL.

"I would like to think that we'll be competing with Celtic next week, it will be interesting to see that game."

Of the win against the Buddies, Brown felt the scoreline flattered the Dons, who netted through Jonny Hayes, Niall McGinn, Chris Clark and Mark Reynolds before Steven Thompson's late reply.

"I'm very happy win away from home anywhere," Brown reflected. "We played a very determined, resolute game and took the chances that came our way.

"I don't think the scoreline was an accurate reflection on the game, it was closer than that.

"But I genuinely believe we deserved to win."

Ryan Fraser hobbled off following a second-half tackled by Marc McAusland and though Brown did not regard the challenge as an unfair one, the Aberdeen boss was unhappy at the treatment the winger received from the home fans.

"I'm disappointed in the crowd booing him because he went down in a tackle which was a heavy challenge and he never, ever play-acts; he never, ever pretends he's hurt," added Brown.

"So, it disappointing to hear some of the St Mirren people booing him every time he got the ball because these are the kind of players you should be cheering and encouraging - the talented ball players, the wingers that can beat men and create for teams and for the game in general."