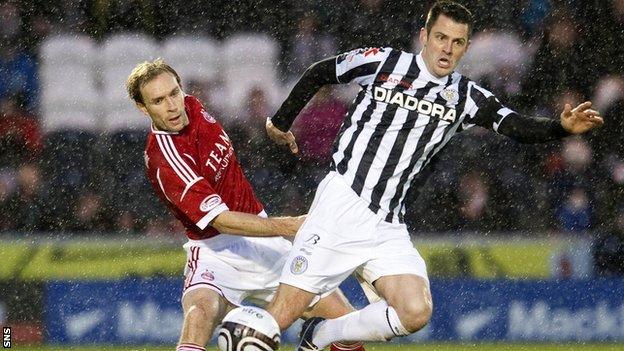 Manager Danny Lennon emphasised his belief in the St Mirren squad, insisting they can recover from their current slump.

"This is the test of time when the chips are down, you look for your characters and we've certainly got that in abundance,"said Lennon.

"I definitely believe in my staff and the players that I have."

St Mirren created decent chances either side of falling behind to Jonny Hayes' opener for Aberdeen but Niall McGinn's strike effectively ended the hosts' chances before Chris Clark and Mark Reynolds netted further efforts for the Dons.

Steven Thompson scored a late consolation for Lennon's side.

"Very frustrating," reflected Lennon, whose side are second bottom of the Scottish Premier League. "The chips are down at this minute, not a lot going for us results-wise.

"What we are not doing now is being difficult to beat. That is disappointing.

"It's a challenge for us. It's a marathon of a league. I'm confident that it will turn for us, there's no doubt about that.

"Every manager that's been on a run like this will tell you that your stomach's like a washing machine turning and churning. What we have to do is make sure we stick together.

"What's behind us is behind us. We are where we are and we've got to make sure that the challenge ahead of us is to get ourselves out of this and get back in amongst the pack."

Lennon insists he could "totally understand" the frustration of fans who left Saturday's match early and hinted that he may be able strengthen his squad during the January transfer window.

"There's always a possibility," he added. "To freshen things up, that would be ideal but I certainly believe in the group of players that we have."