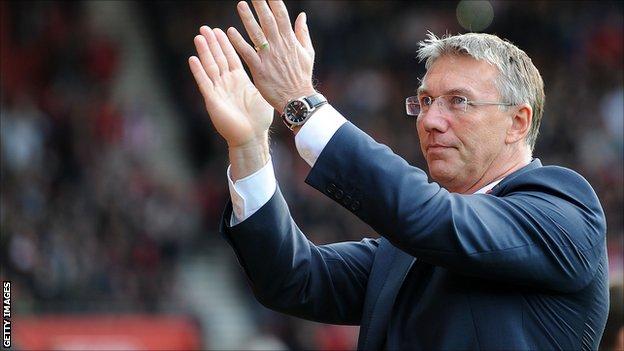 Southampton manager Nigel Adkins remained defiant after seeing his side surrender their lead against Swansea.

"Southampton manager Nigel Adkins didn't get the result he needed and the speculation over his position will intensify. At this stage of the season, a home draw is not enough, as I'm sure the Southampton hierarchy will agree."

It was the fifth time this season Adkins's side have blown a lead, but he put on a brave face after the 1-1 draw.

"You've seen today the whole football club is united and we are determined to be successful here at Southampton," Adkins told BBC Sport.

The equaliser came with 17 minutes remaining when goalkeeper Paulo Gazzaniga played an awful ball to Maya Yoshida. The centre-back's control was poor, allowing Dyer to steal the ball before slotting home.

It was the 29th goal that Southampton have conceded this season, and heaped yet more pressure onto Adkins whose side remain in the bottom three.

But while understandably upset at the nature of the goal, he refused to be downbeat.

"Of course we are gutted not to have taken all three points," he said. "Swansea are a very good passing side and we've dominated for long spells.

This was the first Premier League game of the season in which Southampton had not fallen behind.

"It's another point on the board. We wanted the three and a clean sheet, but let's take the positives.

"It was a good performance but a poor decision from a young keeper has led to a goal.

"We've got a young side, but we've got a group of players who are all heading in the right direction."

Adkins's future has been in doubt since their 2-0 defeat to West Brom on Monday. He admitted afterwards that he was favourite to be the first manager to lose his job this season.

But, prior to Saturday's game, he said he retained the full support of the chairman Nicola Cortese.

The Southampton fans echoed that backing throughout the game, something Adkins was quick to acknowledge.

"It shows how united we are, together as one and on a personal note it (the support) is fantastic.

"We all want to be successful around the football club and we are all working our socks off to keep progressing."

Southampton next face fellow Premier League strugglers QPR, but Adkins insisted there was no extra value attached to that fixture.

"It doesn't matter who we play," said Adkins. "They are all big games."