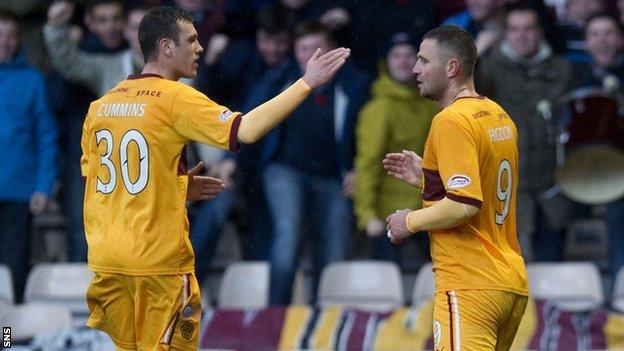 Motherwell manager Stuart McCall feels his side need to start getting the first goal if they are to improve their home form.

McCall's men had lost their previous matches at Fir Park.

"Our main problem at home at the moment is getting the first goal," McCall told BBC Scotland.

"We had opportunities to get the first goal, we didn't and they put us on the back foot.

"Obviously, we were pleased to get our goal right on half-time. And, for all the ball we had second half, we created bits and bobs but not enough.

"Overall, we've had loads of the possession of the ball but we've not played as well as we have done in previous games and got beat. We could've ended up nicking it. We weren't at our best.

"We're always disappointed at home not to win the games and I felt as much as we had a lot of the ball and created chances, you've got to give credit to Dundee. They worked ever so hard.

"It's just not going for us at the moment. There's nothing individual you can put your finger on, just the fact that other teams are all very evenly matched and we've no divine right as Motherwell to go our and expect to win games. We've got to work hard and take the chances when they come along."