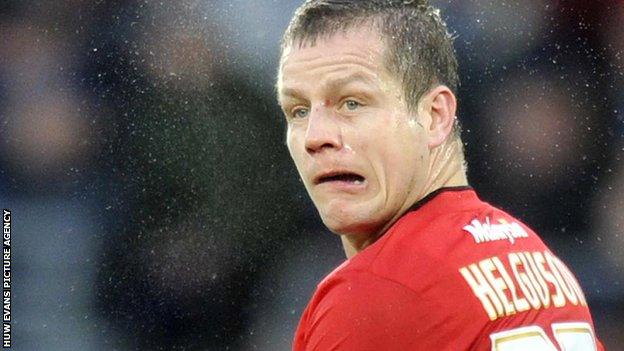 Cardiff City manager Malky Mackay has described Heidar Helguson as the bravest player he has ever worked with.

Helguson scored Cardiff's opening goal in their 2-1 win over Hull City with a header from Craig Noone's cross.

The 35-year-old striker had to have lengthy treatment on the pitch after colliding with Tiger keeper Ben Amos in the process of scoring.

"For me he's probably the bravest player I've ever been involved with and worked with," Mackay said.

"Helguson's so brave with his header, it doesn't surprise me.

He [Hudson] leads by example, scores important goals for the club and defends to a man

"What surprises me even less is five minutes later with two bandages up his nose and he's going into aerial challenges with Abdoulay Faye and winning them.

"I'm delighted for him. That's why he's an Icelandic international with 50 caps."

Helguson's eighth goal of the season set Cardiff on their way against Hull in the Championship at Cardiff City Stadium.

Mackay's side had numerous chances to double their advantage but had to wait until eight minutes from time for captain Mark Hudson to seal the victory.

Robert Koren scored a stoppage-time consolation for Hull but Cardiff held on to secure victory after two successive away defeats.

"We knew we'd be playing a very good team, a team that's won five games out of six and play with a different shape and make you think about different problems," Mackay added.

"But we started like a house on fire and I think for half an hour until Kevin McNaughton went off, we looked as if we could score two, three four goals.

"Every time the ball went in the box we looked as if we could score."

Mackay also praised captain and goalscorer Hudson, who had received criticism following the defeat at Charlton.

"He leads by example, scores important goals for the club and defends to a man," Mackay said.

"Yes, Tuesday night he didn't have a good night, but is that quickly forgotten about when people call for your captain's armband to be stripped off. I find that a disgrace."