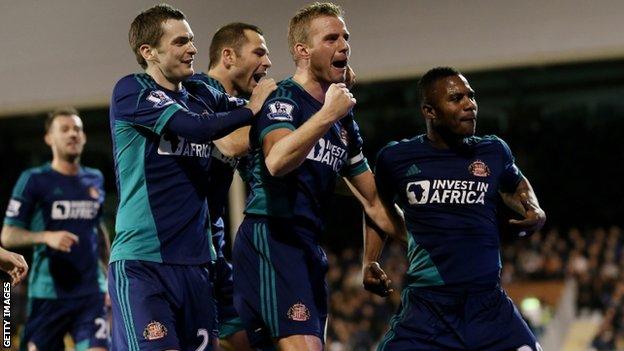 Sunderland produced a rousing second-half display to record only their second Premier League victory of the season at the expense of 10-man Fulham.

The dismissal of Brede Hangeland after 30 minutes proved the turning point.

Steven Fletcher poked in to put Sunderland ahead just after half-time, only for Fulham to level as substitute Mladen Petric netted from close range.

But Sunderland hit back through Carlos Cuellar and a spectacular strike from Stephane Sessegnon to seal victory.

This was a vital win for Martin O'Neill's side. The pressure had begun to grow after a run of just one victory in 18 Premier League matches.

But if the supporters had been restless before kick-off, all that was forgotten at the final whistle as Sunderland's travelling support celebrated their first away win in the league since February.

The opening 45 minutes had been a demonstration of why the Black Cats have struggled so badly in recent times.

O'Neill's side lacked cohesion, confidence and sustained threat; they were insipid not inventive. While they desperately needed tempo, they produced only tedium.

For the opening half-hour, Fulham dictated play with Dimitar Berbatov in the thick of the action, heading one chance over after four minutes and conjuring up another for Steve Sidwell, only for the midfielder to shoot tamely at Sunderland goalkeeper Simon Mignolet.

But then came the afternoon's defining moment as Hangeland was sent off for a two-footed challenge on Lee Cattermole. Referee Lee Probert produced a red card almost immediately - although the actual contact with the Sunderland man was minimal, the challenge was reckless at best.

It was an opportunity for Sunderland, but for the remainder of the half they played like a side burdened by a new sense of expectation. This was a chance they simply could not afford to pass up.

To their credit, O'Neill's side emerged from the interval with more intent and a move more incisive than anything they had managed before the break produced the opening goal.

The visitors' breakthrough actually came from Fulham's best chance of the match, as John Arne Riise's deflected shot rebounded from the underside of the crossbar and set Sunderland in motion.

Adam Johnson raced away down the left, before curling a delightful pass into the path of Fletcher at the edge of the box. His first touch controlled the ball, his second nudged it beyond Fulham goalkeeper Mark Schwarzer and into the net.

Fulham's troubles increased moments later when Bryan Ruiz, having tweaked his hamstring, limped off to be replaced by Petric.

Sunderland immediately sought to press home their advantage and were only denied by Schwarzer, who threw himself low to his right to tip Johnson's curling shot to safety.

And yet the home support roused their side, as Damien Duff surged forward, took advantage of a fortunate deflection off Hugo Rodallega, and squared the ball for Petric to fire in from six yards. But crucially the Croatian striker injured himself in the act of scoring and, with Fulham briefly reduced to nine men, Sunderland struck again.

Johnson's left-wing corner was met by Cuellar, who rose above Sidwell to head firmly beyond Schwarzer.

The final whistle was greeted with a pump of the fist by O'Neill. The Sunderland manager's relief was palpable.