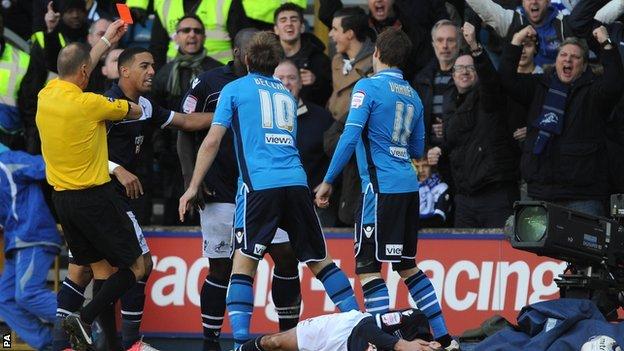 Chris Wood scored the only goal of the game for Millwall as they beat 10-man Leeds in a tense encounter at The Den.

After a goalless opening period, Leeds' Luke Varney was dismissed early in the second half for an elbow on Adam Smith.

The visitors, who created few chances throughout, held on until Wood met Shane Lowry's tantalising cross to head home the winner in the 86th minute.

With only one win in their last nine games, Leeds' slump continues.

"After the 6-1 against Watford, this was a spirited performance from Leeds. They made it difficult for Millwall but a quality strike separated the sides. Chris Wood deserved the goal as he led the line well. Kenny Jackett will be delighted with his side's showing."

While uncertainty surrounding the club's future off the field may not be helping matters on the pitch, this was at least an improvement on last weekend's humiliating 6-1 defeat at home to Watford.

Millwall, meanwhile, are now unbeaten in 10 games and move up to ninth in the Championship table, just two points off a play-off place.

The game started at a fast pace but without clear-cut chances at either end.

Leeds forward El Hadji-Diouf was in the thick of the early action. After only two minutes, he was hacked down by Mark Beevers on the edge of the box, the Millwall defender earning a yellow card for the challenge.

Having been restricted to long-range efforts early on, Millwall had a great chance to open the scoring as striker Wood met Chris Taylor's corner only to see his header cleared off the line by Tom Lees.

The home side grew into the game with Wood and former Leeds man Andy Keogh combining well up front. New Zealand international Wood was impressive throughout, holding the ball up with his burly figure, and his side should have taken the lead late in the first half when he fed Keogh who dragged his shot wide.

At the other end, Leeds frontmen Diouf and Luciano Becchio were unable to find any cohesion and it did not help matters when Varney was dismissed early in the second half.

Millwall increased the pressure against their depleted opponents and again came close to breaking the deadlock from a powerful Wood effort. But despite dominating possession, Millwall lacked incisiveness in attack and were still failing to work goalkeeper Paddy Kenny.

But one moment of quality delighted the home fans. Lowry swung in a cross that was met six yards out by Wood, who made no mistake with his headed finish.

Tonge had a late chance for Leeds with another free-kick but lifted his effort high and well wide, leaving Millwall to celebrate a third straight league win.

Millwall manager Kenny Jackett: "It was a real quality goal that decided it - a fantastic ball from Shane and Chris was in the right place at the right time.

"Any win in the Championship is hard-earned and this was no exception - Millwall v Leeds games are always very passionate. We're pleased to come out on top against a side as big as Leeds.

"We've put together the run by reducing the goals against. It was another great clean sheet from the whole team. We've got two tough away games to Blackburn and Wolves so we'll have to keep it up.

Leeds boss Neil Warnock: "I thought we were very short-changed. I thought we did all right in the circumstances - we tried to win the game.

"The amount of effort that's gone into the game and we're talking about a refereeing decision - it's scandalous.

"When you watch the sending off again, we don't have thousands of Millwall fans screaming at us. It's not caught him where he's holding when he's gone down.

"I wish we did it more - you might call it cheating, but I've seen Adam Drury get topped - and keep going. He should go down and roll, shouldn't he? We don't get free-kicks, and we wonder why.

"Referees aren't as consistent - they've gone backwards, I think. I didn't think someone of Mark Halsey's quality and experience would have gone straight for his red card.

"I think he'll be disappointed when he sees it, but that will do us no good."