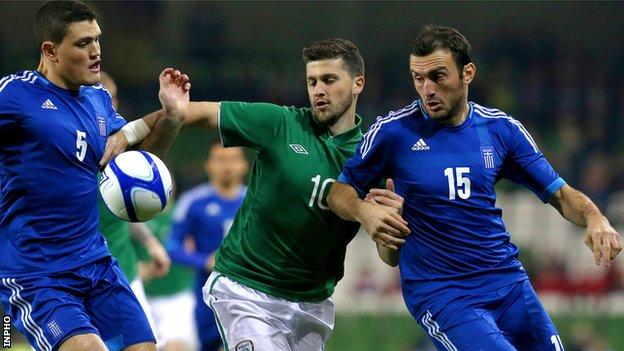 Giovanni Trapattoni's youthful Republic of Ireland side slipped to defeat against Greece as a first-half strike by Jose Holebas decided the friendly.

The Republic appeared to be denied a clear penalty in the opening minute after Konstantinos Stafylidis handled a Stephen Ward cross.

Simon Cox then wasted a glorious Republic chance before Holebas put the Greeks ahead on 29 minutes.

The Irish bossed second-half possession but could not break down the visitors.

The end result, after a promising beginning, was another disappointing home defeat which is bound to put further pressure on Trapattoni.

The Italian, bringing his side back to the Aviva Stadium for the first time since last month's 6-1 humiliation by Germany, opted to pick a young line-up with Ciaran Clark, Robbie Brady, James McClean and Shane Long among the starters.

The Republic manager had been close to losing his job after the Germany embarrassment, only to be saved by the 4-1 win in the Faroe Islands four days later and the fact a severance package would have cost the cash-strapped Football Association of Ireland in excess of £1m.

Trapattoni's side looked to be denied a clear penalty in the opening seconds when Greek defender Stafylidis appeared to handle a Ward cross but Israeli referee Eitan Shmuelevitz turned down the appeals.

As the Republic continued their promising start, Cox should have headed the opening goal in the 10th minute but was badly off target from close range after a superb cross by the lively Seamus Coleman.

Everton defender Coleman was at the heart of the Republic's best attacking work early on as he linked up well with Brady and Long.

However, the Greeks gradually began to show a bit of ambition and Irish keeper Forde, a late replacement for injured Keiren Westwood, had to turn away a Sotiris Ninis shot for a corner in the 23rd minute.

With the Greeks beginning to sense Irish vulnerability, they took the lead in the 29th minute as Holebas turned to fire in from the edge of the box for his first international goal after playing a one-two with Celtic's Georgios Samaras.

Holebas and Samaras were given far too much room by the Irish defence but was still a fine strike by the Olympiacos player in his 10th international.

After the Republic's lively start they were beginning to labour and Aston Villa defender Clark was fortunate to escape with only a booking a minute before half-time after a dreadful scything challenge on goalscorer Holebas.

Brady tested Greek keeper Orestis Karnezis in first-half injury-time but it was the Manchester United youngster's final involvement as both he and Long made way for Wes Hoolahan and Kevin Doyle at the break.

Karnezis came to Greece's rescue again two minutes after the resumption as he beat away James McCarthy's 20-yard drive with Kevin Doyle's angled follow-up then cleared.

As the Greeks began to drop back deeper and deeper, the Republic were able to dominate possession for the remainder of the game.

However, despite a lot of huff and puff, the home side put keeper Karnezis only under sporadic threat in the closing half hour.

Full-back Ward did waste a 69th-minute chance as he failed to get full purchase on a close-range volley but there was precious little else of note to excite the home supporters in the 16,256 attendance.