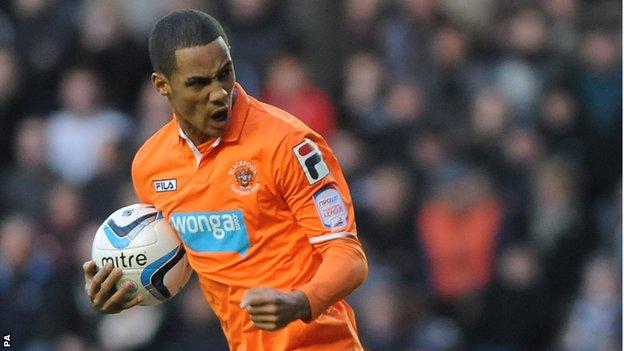 Michael Appleton says that one of his biggest challenges during the early months of his reign at Blackpool will be keeping Tom Ince and Matty Phillips.

The two young wingers impressed during the with Ince netting his ninth goal of the season.

Both players are reportedly targets for Premier League clubs.

"There are two or three in there that will be getting a lot of interest from elsewhere," Appleton told BBC Sport.

Tom Ince scored his ninth goal of the season against Bolton on Saturday, surpassing his tally from the whole of the 2011-12 campaign

"We've got to try to create an environment for the likes of Tom and Matty Phillips to make sure that they don't want to leave the football club, or when they do leave, it's the right time for them and the club."

Phillips was the subject of a £5m bid from Southampton in August, which led to the 21-year-old Scotland international

At around the same time, then-Seasiders boss Ian Holloway said Ince, 20, was by his father, ex-England captain Paul.

Appleton, watched his new side come from behind twice to earn a point against Bolton, who themselves remain unbeaten in three matches under their new boss Dougie Freedman.

And the former Portsmouth boss has already seen areas where his players can improve.

"There's a lot of quality in there but I said to them after the game that I think we need to be fitter," added the 36-year-old.

"We'll get that. That will come over time. The intensity of training will get better and they'll get used to that."