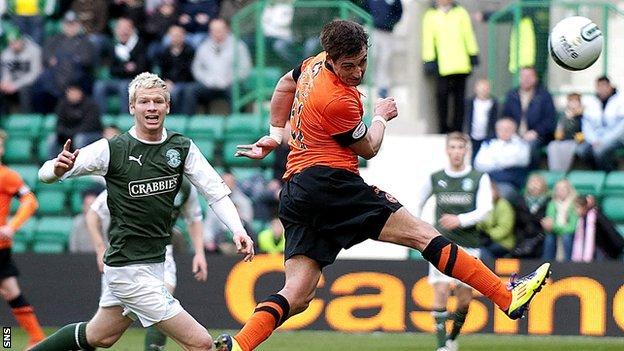 Former Hearts player Rudi Skacel looked to have headed an equaliser after coming on as a second-half substitute.

And his manager feels replays show the goal should have stood.

"It's the wrong decision from officials again. We're told how we've got the best officials, but that's a mistake, that's an error," said Houston.

"These things happen, but it's disappointing when you should have got a goal."

Houston was also left disappointed by a slow start to the match by his side, which allowed Hibs to take an early lead.

"We were second to all the scraps and never did well at all.

"At half-time we spoke about the fact that we had to do a lot better, and to be fair to the lads, we did.

"From then on in it was incessant pressure from us and we were unfortunate, in my opinion, not to get something from the game.

"The second half was miles better, but we've got to learn that we can't start games and give teams a goal of a start."

Houston admitted that his side's slow start to the game forced him into making a change only 30 minutes into the match, replacing Mark Millar with Gary Mackay-Steven.

"We weren't a threat, we were never up on it and we had to change it a wee bit," added the United boss.

"So I decided to do it because I didn't want us going in two-nothing down.

"And in the second half it paid off. Johnny Russell got closer to Jon Daly and we got a goal disallowed that seemingly the cameras show was onside."