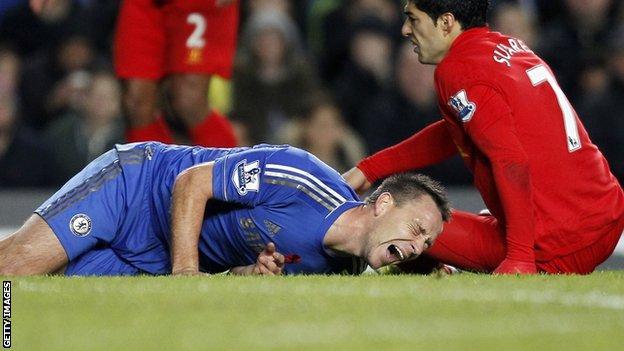 Chelsea captain John Terry will be out for around three weeks through injury, manager Roberto Di Matteo has confirmed.

He had a scan on suspected ligament damage on Monday, but Di Matteo says the damage is not significant.

In matches that Terry has appeared in this season Chelsea have conceded an average of 1.09 goals a game. In matches without him that figure rises to two goals a game.

"With Terry, we're looking at approximately three weeks out, fortunately it's not as bad as we first thought," he said.

Terry scored on his return from a four-match ban but was carried off after an accidental collision with Luis Suarez.

Terry's goal came in the 20th minute but a collision with the Liverpool striker on 39 minutes forced him to be carried off on a stretcher. He later left Stamford Bridge on crutches with his right knee in a brace.

"Terry's injury was unfortunate as he looked sharp and gave the team a lot of confidence, but you have to deal with injuries," added Di Matteo.

With David Luiz out of action with tonsillitis, Gary Cahill and Branislav Ivanovic are the Blues' only fit centre-backs.

Following his decision during a match in October 2011, Terry was suspended for league matches against Tottenham, Manchester United and Swansea, as well as a League Cup fourth-round tie against Manchester United.

Di Matteo also opted not to use the former England skipper in the Champions League win over Shakhtar Donetsk once he had served that punishment.

The Blues conceded 12 goals in those five games, compared to four in Terry's last five appearances for the club.

Chelsea play Manchester City and local rivals Fulham in the league and Juventus in the Champions League before they meet Southampton at Stamford Bridge on 15 December.

Goalkeeper Petr Cech has worn the captain's armband in Terry's absence and believes that the defender's lay-off will give other players in the squad a chance to shine.

"He knows what it takes to come back in good shape and as soon as possible. He always heals well," said Cech.