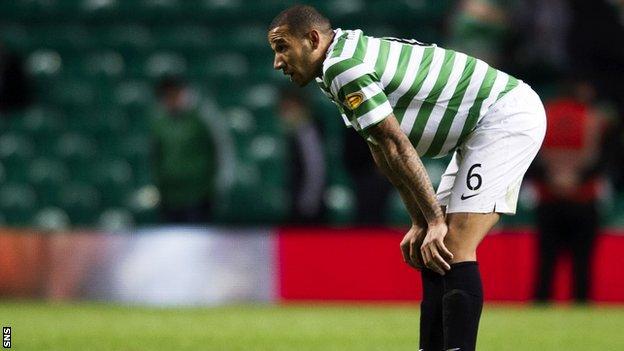 Celtic manager Neil Lennon admitted there was a lot of "physical and mental fatigue in the team" following a low-key display against St Johnstone.

Saints fought back from a goal down to claim a draw in Glasgow with Nigel Hasselbaink cancelling out Tony Watt's 51st-minute opener.

"We have a heavy schedule and it's taken its toll a little bit on the squad," said Lennon.

"The players are giving me everything but they just ran out of puff."

But Lennon was not overly worried about domestic form.

"We've been in worse positions than this," he said. "We're two points behind with a game in hand.

"Last season we were 15 points behind.

"Once the Champions League rounds are over and we get maybe a month or two of week-to-week football, I think you'll start to see the team become really consistent and play with a lot more energy."

Lennon was frustrated by his team's "lethargy" as Hasselbaink levelled 13 minutes from the end.

"We've played considerably more games than any other team in the league," he continued.

"We had half a day to prepare for this game.

"As the game wore on I'd like to have made six changes if I could have because the players were feeling it. They were cramping up, they were stiff and sore.

"I understand that but the disappointing thing for me is that we got the goal and we have conceded a lead again.

"We didn't work the goalkeeper enough but you have to give St Johnstone credit too.

"There was a flatness about us, a lethargy, but that's just the games catching up."