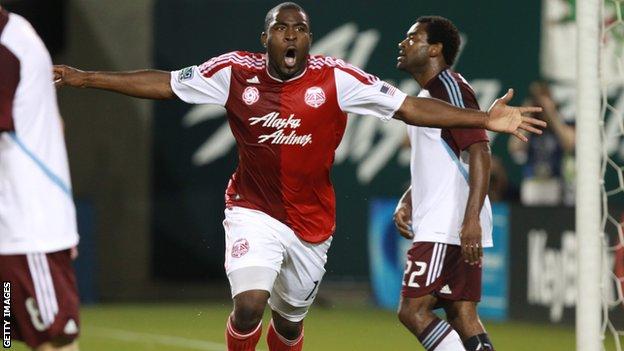 Nigeria coach Stephen Keshi has added uncapped striker Bright Dike to the squad ahead of Wednesday's friendly international against Venezuela in Miami.

Dike plays for USA club Portland Timbers and was born in Oklahoma City, to Nigerian parents.

For the 25-year-old, this is his first national team call-up at any level.

He netted five goals in 12 matches toward the end of Timbers' 2012 campaign, which ended two weeks ago.

Dike is still relatively new to professional football, having arrived at Portland just two years ago. This followed a successful US college career at the University of Notre Dame.

He spent his first season impressing in the club's reserves side, only to rupture an Achilles ahead of the 2011 campaign.

This delayed his MLS debut, which came in July 2011. A little over a year on from that, and he could be about to make his international debut.

Dike has been drafted in, along with Sharks FC's Gomo Onduku, after John Mikel Obi, Victor Moses and Onyekachi Apam were all excused from the squad.